It is somewhat surprising, given my love of Man v Food, that I am also not a regular watcher of Diners, Drive-Ins and Dives. In fact, on paper I should like DDD even more – there are no challenges, which are my least favorite part of Man v Food, and I am a frequent patron of diners. And who doesn’t love a good dive, where the amazing food makes up for the lack of ambiance or the scariness of the patrons? But despite my inherent affinity for the show’s subject matter, I had only seen one or two episodes. I wager that the reason the show wasn’t in my regular viewing rotation was twofold: I didn’t know when the episodes were on (the few times I saw it, I stumbled upon it while flipping channels) and I don’t really care for host Guy Fieri. While I find Adam Richman has a pleasant demeanor, Fieri strikes me as moderately annoying. I can’t quite put my finger on what irritates me – maybe it’s the hair.

However, annoying or not, I assume the guy knows his food. So when it was suggested while I was on vacation that we make the short drive to Pescadero, California to have lunch at Duarte’s Tavern, a place that was not only Diners, Drive-Ins and Dives but also The Best Thing I Ever Ate, I jumped at the chance. Before we went, I went to YouTube to familiarize myself with what Guy recommended:

We decided that we’d order everything that was featured in the episode (minus the dessert) and split it so we’d be able to have the full DDD experience and allow us to sample more things.

The ride to Duarte’s was beautiful; Highway One hugs the Pacific Ocean and provides some gorgeous views of the beach and the waves.

View from Highway One

Pescadero was a cute little town kind of in the middle of nowhere. And even thought we were in Northern California, the town had a very Old West feel to it. I wouldn’t have been surprised to see some tumbleweeds blow past or witness a shoot-out at high noon. Sadly, the town did not appear to have a saloon. The interior of Duarte’s was also a bit of a time warp; it was pleasant and clean, but it had a very retro feel to it and there weren’t many frills. The walls are covered with wood paneling, which hasn’t been popular in many, many years. Obviously this is a place where you go for the food, not the flashy atmosphere.

The first item on our culinary tour was the cream of artichoke soup. One of the things I love about going to California is the freshness of the produce and the abundance of artichokes. I’m a sucker for artichokes. My pinterest board is filled with recipes featuring the artichoke, though I’ve yet to actually make any of them. So even if this hadn’t been featured on the show, I probably would have ordered it. It is also one of their signature dishes; Duarte’s is kind of known as “the place with the artichoke soup.” 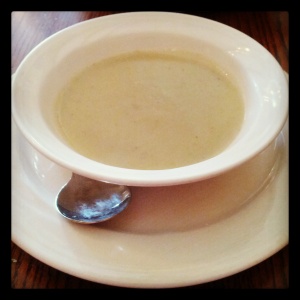 The soup was absolutely delicious. The soup was creamy, yet not heavy. It paired well with the sourdough bread that was served with it. I was a little disappointed that we had agreed to share everything, because I finished my bowl very quickly and would have loved to have some more. Next time I’ll be more adventurous and try the cream of artichoke/green chili soup mixture. It’s not on the menu, but they will combine the two soups for you and it’s supposed to be really good. My friend had actually suggested we do this, but I was hesitant that with the green chili it would be too spicy for my liking. Yes – I am a totally wimp.

Our next course was the Abalone Sandwich and fries. I’d never heard of Abalone before, but I love all seafood so I was willing to give it a whirl, even if I wasn’t really sure what to expect. The Abalone was lightly breaded and as served on sour dough. Compared to the sandwiches that you get in many other restaurants, it was painstakingly simple. The waitress brought us out some tartar sauce, but warned us of letting the cook catch us using it. I think she was kidding. But to be safe, I left my half of the sandwich pure and unadulterated.

I liked the sandwich, but I can’t say I necessarily loved it. I am led to believe that a properly prepared Abalone sandwich is something of a rarity, but since I had never heard of it before I couldn’t really appreciate the treat that I was enjoying. My only complaint was that on one of my first bites most of the Abalone separated itself from the breading, so I pulled the majority of the meat out of the sandwich. My last few bites comprised of breading and bread, which is pretty much the anti-Atkins meal. Glad I tried it, just to say that I had, but I would want to try something else the next time.

Our final course was the part of the meal that I was most looking forward to – the Crab Cioppino. I’ve already stated my love of artichokes, but multiply that by a thousand and you’ll have my affection for crab. It is absolutely one of my favorite foods, even if crab legs often seem like an awful lot of work for not much meat. The Cioppino consisted of Dungeness crab with prawns, and clams in a tomato-based sauce with onion, garlic and cumin. It looked pretty impressive when it arrived at the table and they gave us some old school cloth bibs (totally in keeping with the décor) so we wouldn’t get any of the tomato sauce on our clothes.

Again, I’d have to say that the Cioppino was good, not great. I’m not particularly a fan of tomato based soups; I have some serious issues with the New England based sports teams, but I have to admit that their clam chowder is vastly superior to the Manhattan version. This was the meal that Guy Fieri cited on The Best Thing I Ever Ate, which kind of surprised me. It didn’t strike me as much different than seafood that I’d had anywhere else. The difference must have been in the sauce, which I kind of ignored in favor of picking out all the seafood. My expectations might have been too high; I was anticipating an epic, “I’ll have what she’s having” moment and it just didn’t blow me away. Apparently there are people who are real Cioppino connoisseurs, as a woman stopped by our table to ask if that was Cioppino and to see what we thought. We said that we liked it, but when she said that she was always on the search for “the perfect Cioppino,” we had to fess up and tell her that this was the only Cioppino that we’d ever had, so we might not be the right people to be using as a guidepost. I didn’t have the heart to tell her that I hadn’t even heard of Cioppino until that morning.

The one real knock that I’ll give Duarte’s is that the prices are definitely high. With the soup, sandwich and Cioppino, all of which were split between the two of us, and a soda and my beer (Anchor Steam!), our total bill came to close to $100 before tax and tip. That’s a lot more than I would normally pay for lunch, especially for one that I didn’t find all that earth shattering.

I’d still recommend checking out Duarte’s if you are in the area, especially for the artichoke soup. That was definitely my favorite part of the meal. I wouldn’t be afraid to go back if the opportunity arose – everything was good – but I’d probably mix it up and order different things on the next go round (which might be a while since, you know, I live across the country). I’d also go in with slightly lowered expectations than I had for this trip, which may have unfairly set the bar pretty high. And I can’t complain about any day where I get to have seafood. In the meantime, I found a recipe for the artichoke soup online, which can tide me over until my next visit. I’ve also started DVRing Diners, Drive-Ins and Dives for more inspiration when I travel. Duarte’s might not have been a home run, but it was a solid suggestion and I got to try some things I’d never had before, which made it worth the trip. I’m not totally sold on Guy Fieri yet, but I’m hoping he’ll grow on me. He wouldn’t be the first annoying guy that I’ve learned to tolerate for the greater good.

One thought on “Diners, Drive-Ins and Dives – Duarte’s Tavern Edition”