I was a really big Stephen King fan back when I was in middle school, thanks to a recommendation from my 7th grade English teacher (R.I.P Mrs. Adams). For a while there that was all that I read; Carrie, Cujo, The Shining, Firestarter, Christine, Thinner, It, Misery, The Tommyknockers, Pet Sematary – I immersed myself in the dark and creepy world of King. I can’t say that the books ever really freaked me out or scared me, with the notable exception of It. That, however, had to do with my general unease around clowns more than anything else. I won’t go so far to say that I am afraid of clowns – if I see one I don’t seize up in terror – but I generally think that they are shady. I remember having to turn my copy of It around on the bookshelf as falling asleep with an image of Pennywise the Clown in my peripheral vision was not the most soothing way to drift off to dreamland. 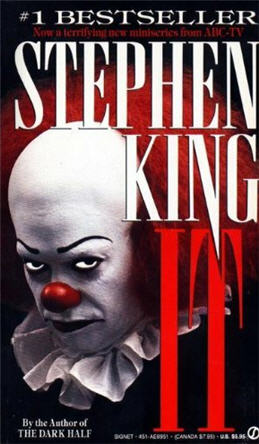 That is one creepy clown

I eventually burned out on King books, since even at the tender age of twelve I thought that the endings of his books were problematic (a critic from birth). I got the sense that King didn’t really know how to wrap up the compelling tales that he was spinning and that too often he tried to put something of a button on things rather than leaving the stories with a more open ended finale.  After reading enough books where I was unsatisfied with the ultimate resolution, I just stopped reading King books at some point. I wanted to transition to more “sophisticated” literature and had exhausted my interest in the supernatural for the time being. Stephen King was a phase that I simply grew out of.

I’ve always kind of kept tabs on what King was up to, even if I wasn’t actively consuming his work. Part of that is because we share the same birthday, so that puts him on my radar at least once a year. He cranks books out pretty quickly, so there is always a new Stephen King book floating around in the world of pop culture; I like to know what is out there, even if I’m not necessarily a fan. Being a pop culture connoisseur means you have to know the lay of the land regardless of if you have the time or interest for everything. Because I keep my ear to the ground, I’ve noticed that the last few years have marked something of a resurgence in Stephen King; for a long time he would release a book and there would be some momentary chatter, but that would dissipate quickly. The only people that were really excited for a new King book were the die-hard fans and I knew fewer and fewer of them. But that all changed around 2009 with King’s release of Under the Dome. For the first time in quite a while, the scuttlebutt about one of his books was more prolonged and louder; people were once again asking each other “did you read the new Stephen King book?” This buzz only got louder with his release of 11/22/63 in 2011; people that I never thought would be reading a King book were recommending that I check it out. Stephen King was back.

So when CBS announced that they were doing a 13 episode mini-series based on Under the Dome, my interest was piqued. Despite the groundswell of interest in King’s recent books, I hadn’t yet found the time to sit down and read them. Part of it was time and burnout from graduate school, but I’ll admit that I was still a bit wary of dipping my toe back in the world of King after leaving it so disappointed. I’m also a very different person than I was the last time I read any of his work, so I was unsure if it would hold the same appeal for me. I decided that I would use the CBS series as a test; if I liked the story enough, I would make the effort to read Under the Dome. Since it is summertime, I don’t have a lot on my viewing plate other than baseball (and that is a horror story of a different sort), so I didn’t mind taking a chance on a limited run series that I knew people would be talking about.

Under the Dome is only two episodes in, so it is a little early to make any definitive judgments. My opinions of the mini-series may change as the story evolves; sometimes it takes a few episodes for a show to find its voice and get on solid footing after the premise has been established. But with those caveats in place, I did have some definite impressions thus far. In a nutshell, I generally like the story, but have found the execution somewhat lacking.

For those of you that are newbies like me, Under the Dome tells the story of the town of Chester’s Mill that is mysteriously and unexpectedly cut off from the world when what appears to be an invisible dome-like barrier is placed over the area. Families are separated from each other as the dome is impenetrable; planes or cars that make impact with the dome are destroyed.  The unfortunate souls that found themselves in the path of the barrier when it appeared were sliced in half or lost limbs. Now that Chester’s Mill is isolated, some of the secrets of the town can no longer be hidden and are beginning to bubble to the surface.

The story is only beginning to unfold in the mini-series, but so far it has generally held my interest. The idea of people being trapped by a mysterious barrier in and of itself is intriguing, but adding the additional layer of some mysterious and shady behavior being brought to light while the townsfolk are all trapped together has some real potential for some interesting commentary on human behavior. There is still a lot to be unpacked in the story – what is this dome, why is it here, what have some of the people in the town been up to, why does a grown man allow himself to be called Barbie – but at this point I’m curious what the resolution is going to be. I don’t need answers right away – I was a fan of Lost, after all – but they seem to be doling out the information at a pace that prevents the viewer from being frustrated. That is one of the benefits of a limited run compared to an open ended series; the folks behind Under the Dome have a clear and definitive timetable to work with.

So story-wise, Under the Dome has my attention. What I find a bit frustrating, however, is how they are choosing to tell this story. Some of the actors and the dialogue, in my opinion, could stand some real improvement. I haven’t read Under the Dome, but I get the sense that they are doing a disservice to the source material with some of the one-dimensional performances and silly dialogue.

Part of the issue is a problem that is my own doing – because I know so many of these actors from previous projects, I am having a hard time adapting to them in these new roles. Dean Norris is a fine actor, but every time he is on screen I fail to see local politician “Big Jim.” Instead, I wonder what Hank from Breaking Bad is doing so far away from Albuquerque. Jeff Fahey will always be Frank Lapidus from Lost and I’m having a tough time seeing Britt Robertson as anything other than Lux from Life Unexpected (a show that depressed me to no end when I realized I was older than her parents on the show). This is of course my own baggage that I’m bringing to the show, but it also speaks to the fact that these actors are not totally disappearing into their characters. I wonder if with such a short run, they may have been better off with some lesser well-known actors that would not have the same hurdles to overcome.

The characters in general on Under the Dome are pretty thin; while some of that is due to the fact that there is a lot of mystery shrouding the people of Chester’s Mill, this works to varying degrees. In particular, the character of Big Jim’s son is a real issue for me as he is completely one dimensional and a complete caricature. I have no idea why he is acting the way he is acting nor am I particularly interested in his storyline. Every time we jump to that story, I am noticeable less engaged. Many of the actors are a bit wooden in their performance; they don’t seem natural, but like people who are clearly acting. I’m hoping that some of these characters begin to get a bit flushed out as right now some of them are just walking clichés. Some of the dialogue doesn’t really help matters; there is a lot of exposition and the language used feels forced in many ways. The whole production feels very CBS-y, which I do not mean as a compliment. I think I would have preferred a more sophisticated adaption on one of the cable channels. I think they would do a more subtle and nuanced miniseries.

Some other random thoughts:

That being said, I am compelled enough by the story to generally overlook some of these shortcomings. Under the Dome so far isn’t bad, but I am finding parts of it lacking. I’ll be interested to see if the parts of the mini-series that I find problematic improve or if they become more of an issue if I am no longer distracted by the overarching mystery. The one thing that the mini-series has prompted me to do is move the novel up on my reading list, so by that measure the television version can be considered a success.

Under the Dome airs Monday nights at 10 pm (ET) on CBS.

13 thoughts on “Some Early Thoughts on Under the Dome”