I had two main takeaways after seeing Maleficent:

One of the reasons that I had anxiously anticipated the release of Maleficent was because I really do enjoy the retelling of fairy tales, especially when they are told from a different character’s perspective. One of my early encouragements as a writer came when my short story retelling Jack and the Beanstalk from the Giant’s perspective was selected to be published in my high school’s literary magazine. I think I liked the idea of an unreliable narrator and messing around with the point of view; I’m sure that it helps that I don’t really have any special affinity for fairy tales and therefore don’t have any reservations about altering the story. As we’ve established, I didn’t grow up watching Disney movies and have a rudimentary knowledge at best of most fairy tales. So you are less likely to hear me argue “that’s not the way it’s supposed to go” about any fairy tale reboot because there is a very likely chance that I don’t even know how it’s supposed to go.

This is particularly true for the story of Sleeping Beauty; while I’ve caught up on a lot of the Disney films of my childhood that I never saw, I have never seen Sleeping Beauty. I don’t think I’ve read Sleeping Beauty either, since I had no idea what her real name was until very recently when one of my friend’s children took me to task for unfamiliarity with Aurora.; the only Auroras that I knew where aurora borealis and the character on Bewitched. I certainly didn’t know anything about Maleficent until I heard that Angelina Jolie would be playing her. How little do I know about Sleeping Beauty? Let’s put it this way – when the spinning wheel turned up in Maleficent, I internally debated for five minutes as to whether or not Rumpelstiltskin was somehow involved in this whole mess. I really had no idea if he was part of the story or not. So to say that I was going into Maleficent blind is kind of an understatement.

Based on the trailers that I had seen for the film, I was expecting Maleficent to be an origin story for a famous-to-everyone-but-me villain (which it was) that would be dark and kind of bad ass (which it was not). I had forgotten that this was not simply the re-telling of a familiar story, but that it was Disney re-telling the story; had I remembered that fact, my expectations for a darker and more exciting film would have potentially been checked. There is only so dark and twisty that Disney is going to get. Still, I can’t say that I’m completely at fault – the promotional campaign for Maleficent certainly spliced together scenes to give a very different impression of the film than it was in actuality. There was far less action and vengeance than advertised and the result was a fairly uneven story.

Maleficent gives a different spin on Sleeping Beauty by focusing on the supposed villain and what caused her to act the way that she does in the tale. Some of the basic plot points are the same: Maleficent does indeed crash Aurora’s christening and puts a spell on her that will leave the young princess in a sleeplike trance for eternity unless she is awoken by true love’s kiss. What Maleficent attempts to do is fill in some of the back story – why is Maleficent so mean? In this version of the tale, the argument is made that Maleficent had some just cause to want vengeance. Turns out the King – Aurora’s father – is kind of a douche that did some unspeakable things to Maleficent. So while her actions might be a little extreme, they don’t just come out of left field.

I’ll certainly give credit where credit is due: Angelina Jolie is excellent as Maleficent. She really inhabits the character and the story does much the shadowy villainess a three-dimensional and fully realized character. Jolie is no slouch as an actress, though her movie choices lately have been a little hit or miss, and she really rises to the occasion in this film. She can be scary one minute and sympathetic in the next and Jolie provides more depth for Maleficent than I’m guessing was actually on the page of the script. It’s a solid performance. You just can’t take your eyes off Jolie whenever she is on screen, partially because of the aforementioned cheekbones. Jolie has a pretty angular face these days to begin with, but through movie magic they manage to exasperate her facial structure to the point where I am pretty sure that you could cut on her cheekbones. It’s almost distracting; the sharpness of her face was all that I could think about at some points, which perhaps means that they overdid it. It certainly ups the scariness quotient for the character. If they had gotten any sharper, she would have looked like this:

It’s no wonder that they had to have Angelina’s real daughter Vivienne Jolie-Pitt play the young Aurora – she was the only kid that wasn’t scared of Jolie. 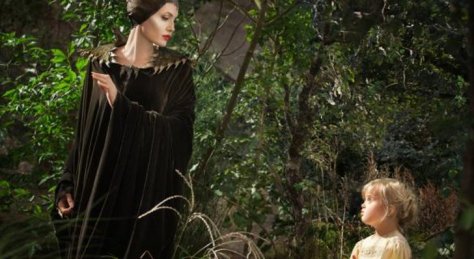 I’ll also give credit to the visual artists involved with Maleficent; they have created a visually appealing and stunning world in which these characters inhabit. It really is gorgeous, especially in the scenes prior to darkness taking over. My only complaint is that there are scenes that rely too heavily on the CGI, perhaps to mask the weakness of the overall story.

I really like the idea behind Maleficent, but I wasn’t overly impressed with the execution. Jolie is so good that she sucks up all the oxygen in the room and none of the other characters or the story are capable of competing with her. The writing is a little clunky – in order to get from point A to point B, the story takes a lot of shortcuts without a lot of emphasis on the journey. People make questionable decisions all over the place and while I know that these are fairy tales and that you have to check logic somewhat at the door, the story that they are trying to tell is hindered by its poor development. Maleficent is such a larger than life character that the writers appeared to put all their energy into her, to the detriment of all the other people and creatures that she interacts with. To say that some of the other characters are one-dimensional would be to give them more depth than they deserve. Even Maleficent, the most fully realized person on screen, makes some erratic changes in behavior that would have been more believable if they were given some moments to breathe or were structured in a more organic moment. If you are going to go from “I want you dead” to “hey – you’re not so bad,” you’d better show some of the steps in between. The movie just doesn’t do that.

Some of this would be a bit more forgivable if there was more going on to distract you from these erratic choices, but there really isn’t. There was a lot of downtime in Maleficent, especially since I was expecting a hell of a lot more action from the film. There are some fight scenes, but in the interim we spend WAY too much time with the three fairy godmothers who are tasked with raising Sleeping Beauty. I know that this is a kid’s movie – well, I know that now – but man oh man are those characters annoying. Comic relief is one thing, but I just couldn’t stand that trio. Every time that they were on screen, I lost complete interest in the film; it was during these moments that I contemplated my theories about Rumpelstiltskin. Perhaps my expectations prior to the film exasperated the problem, but I just found a lot of Maleficent kind of boring. The film has a promising premise, but it squanders it with a poorly structured story and the failure to develop any of the other characters. It doesn’t appear that much thought was put into the story beyond “Maleficent isn’t so bad.” Jolie is simply starring in a film that isn’t worthy of her.

I’d say that Maleficent is worth seeing simply to see Angelina Jolie’s turn as the title character; the film isn’t terrible, but I found it ultimately disappointing. It had such a promising premise and the right actress in the starring role, but failed to fully take advantage of either. It certainly wasn’t the dark, action-packed film that I thought I was getting. I could have overcome that if the film provided something more entertaining in its place, which it just didn’t do. Good work by Jolie but she alone can’t make this a great movie, no matter how hard she tries.