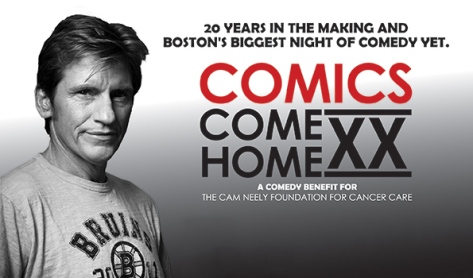 Using stand-up comedy to raise money for charity has a long and proud tradition. While the Comic Relief events are perhaps the most famous on the national level, comedians make a habit of donating their time to fundraisers of all sizes all across the country. While stand-ups are often generalized to be damaged and unhappy people, it seems to me that they have the biggest hearts and freely give of their talents to help others. As a fan of comedy, it’s always nice when I can laugh for a good cause. Somehow, Comics Come Home had flown under my radar up until this year; I may have vaguely heard about it over the years after it happened, but now that I have started going to more events in Boston regularly, I am more keyed into what’s going on in Beantown. And once I heard Jimmy Fallon was involved, it was a no-brainer that I’d have to check the event out; I think I am contractually obligated to attend anything that Fallon is a part of.

Comics Come Home, celebrating its twentieth year, is a fundraiser for the Cam Neely Foundation for Cancer Care that is organized by actor/comic Denis Leary. Neely is a retired hockey player who played for the Boston Bruins and now serves as the team’s President; he has also apparently appeared in Dumb and Dumber according to my guy friends, who are horrified that I have never seen that movie. Many, but not all, of the comedians that participate in Comics Come Home have a connection to the Boston area; they either grew up there or started their careers there. Some of the comics on the bill have a personal connection to the foundation; others just think it is a worthy cause. Over the years, many great comedians have donated their time to the fundraiser and this year was no different – in addition to Leary and Fallon, the 2014 lineup included Bill Burr, Marc Maron, Jim Gaffigan, Lenny Clarke and others. While I’ve seen many of the gentlemen perform before, I was particularly excited to finally get the chance to see Gaffigan, who I’ve been looking forward to seeing but always seem to miss when he’s out on tour. As cancer has recently affected me in a personal way, I was more than happy to help this worthwhile cause while selfishly getting a great night of comedy out of it. I was a little skeptical of the location of the event, as I generally think that comedy is better in a more intimate setting, but if hosting it in the TD Garden meant more money was raised, it would be worth it.

The night kicked off with numerous video messages from comics that were not able to participate this year but that wanted to send their well-wishes. Conan O’Brien wondered why, as a guy that grew up in Boston, they only asked him to send a video every year instead of inviting him to perform. Larry David, in typical Larry David fashion, commended the altruism of the participants and said that he probably wouldn’t participate next year either because “nice thoughts occur to be but I generally don’t act on them.” Craig Ferguson, Jon Stewart and David Letterman all sent video messages as well.

Denis Leary served as the master of ceremonies and host for the event and he got the live show going with a Boston-centric parody of “Sgt. Pepper’s Lonely Hearts Club Band.” I can’t say that I got all the references, but the crowd loved it; my “outside” status as a New Yorker would be reinforced a few times during the evening. Leary then warmed the crowd up with some rants about how at his age he just doesn’t care anymore (that’s a cleaned up version) and how he hates anyone under 30. Leary would pop in and out for the duration of the show to do a little stand-up and then introduce the next comic. 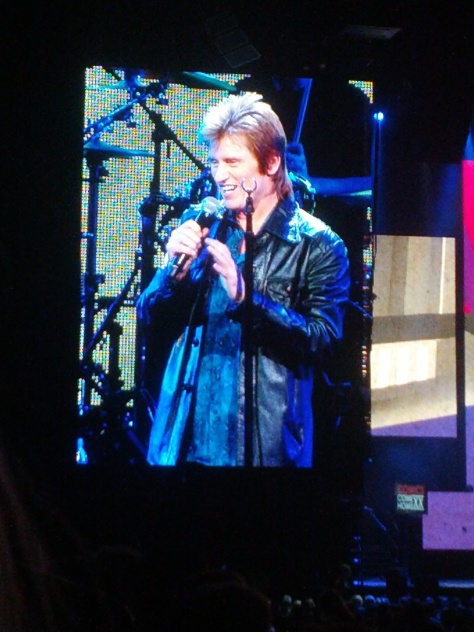 Comedians Tony V and Joe Yannetty got things going and while they may have been among the lesser well known comics on the bill, they both brought their A game to their sets. Yannetty’s set was perhaps the most appropriate to the theme of the night as he had just received a clean bill of health after his battle with cancer. You wouldn’t think cancer in and of itself is funny, but Yannetty was able to mine his experiences for comedy gold. On being dismayed at the number of people who shared sad stories with him of people who had cancer after his diagnosis, he joked that he only wanted to hear triumphant stories from here on out. “Tell me about a woman who had ovarian cancer that is now f*cking her way across Europe!” That punchline got a huge laugh and particularly tickled Leary, who kept coming back to it the rest of the night. Both Tony V and Joe Yannetty were solid and the night was already off to a strong start. 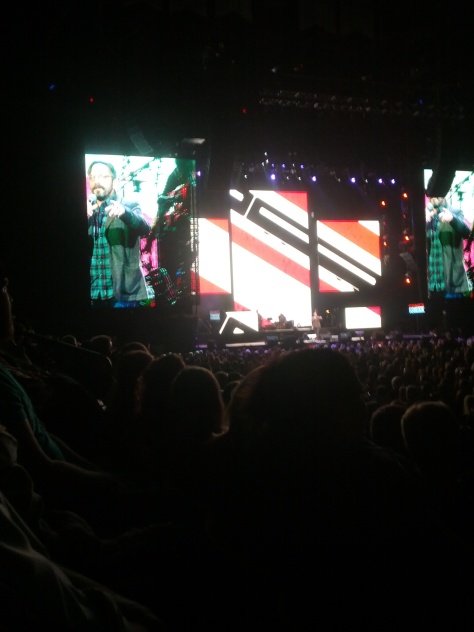 Marc Maron then came out to do a set about his anger issues, kale and the Ebola scare. I always enjoy Maron – I watch his IFC show and listen to his podcast – and appreciate his point of view. I thought his bit about the Ebola scare being a boon time for self-involved people was particularly funny, as well as his observation that kale seemingly came out of nowhere to suddenly be the most important food ever. Maron isn’t necessarily a guy where there are big punchlines or belly laughs in his delivery – he’s more a conversational story-teller than a joke machine – but he was consistently funny throughout his set.

He was followed by Lenny Clarke, who is probably best known from his role on Leary’s FX show Rescue Me. A sizeable portion of his set was about the Hilltop Steakhouse, a former Boston institution. Despite the fact that I had no reference point for his jokes, he was still very funny – while his early observations were about the Hilltop specifically, his later jokes were more relatable to even a Yankee like me. And his Boston-specific humor went over very big with the audience. 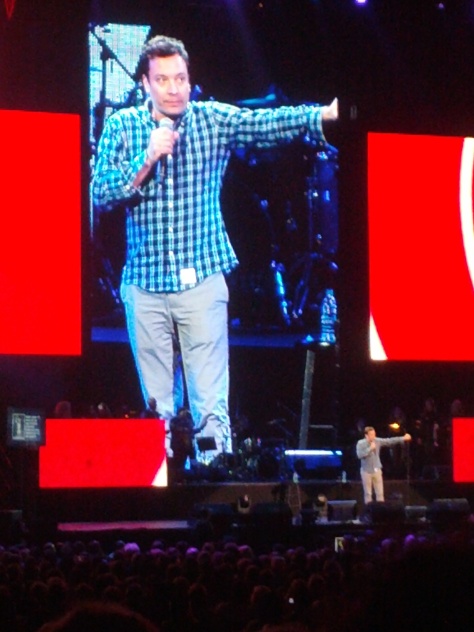 Next, it was finally time for my pal and yours, Jimmy Fallon, to finally take the stage. I was curious what exactly he was going to do; Jimmy may do monologues on his show, but even before he was on Saturday Night Live I don’t know that he was really known for his stand-up. So I wasn’t sure how he was going to entertain the masses. Leary made a point of introducing Fallon as a Yankee and Knicks fan, which earned jeers from the audience – though I bravely cheered – and Fallon rebutted by kicking off his set by pointing out that Leary hadn’t lived in Boston for nearly 25 years and that while Fallon starred in a film about the Red Sox, Leary started in a TV show set in New York City. Fallon then did a bit that he does on the Tonight Show where he awards superlatives to athletes, with the focus on Boston area players. Leary came out to do equal time with New York area athletes; my favorite was the one about Derek Jeter:

Fallon and Leary then did a rendition of “Dirty Water” and Fallon came out into the audience to do his best James Brown impression. His set was capped with an audience sing-a-long of “Sweet Caroline,” which was especially delightful to me since that was my sorority song in college. So the song has special significance to me and the chance to sing it with Fallon and one of my sorority sisters was icing on the cake. The crowd loved Fallon and he gave the event a nice jolt of energy.

Bobby Kelly followed that spectacle and joked that he was in a tough position of being “the fat, bald, nobody comic.” Kelly looked very familiar to me but I couldn’t place where I knew him from; after the fact I realized that he’s appeared on Louie numerous times. When he came out, I turned to my friend Laura and said “hey – it’s THAT guy!” Well, “That guy” wound up stealing the whole entire show from his better known counterparts. Kelly had the audience laughing so hard that I could hear the people around me gasping for a breath. He came out of the gates fast and furious with some hilarious observations about how men in the past could open jars and men of today have “Facebook fingers” that are only adept at using a smart phone. It was then non-stop laughs as he discussed become a father for the first time and the creation and birth of his child. I can’t even begin to do his jokes justice, but his quip that seeing his wife give birth was like seeing someone sneaking a peek out of speakeasy pretty much brought the entire Garden down. He was no longer “That guy” – he was now “Bobby Kelly – the best comic at Comics Come Home.” He was fantastic and I’m still laughing at his set two days later. He was a most pleasant surprise and I’d see him again in a heartbeat.

Jim Gaffigan and Bill Burr took the stage last and Gaffigan was as fun as I hoped he would be. He did some funny material on bringing doughnuts through airport security and Jesus’ ability to create bread being key to his ability to recruit followers. He was affable and made me chuckle quite a bit. I’ll definitely want to see him perform his full set and I may get around to finally reading his books while I’m traveling the next few weekends. Burr is a much angrier comedian and he seemed even crankier after following Gaffigan. His more misogynist jokes didn’t work for everyone – the women behind me certainly weren’t fans – and he was probably my least favorite of the comedians. He was still pretty funny, but something about his vibe and material just didn’t connect with me this time around; I saw him a few months ago and enjoyed him more then. 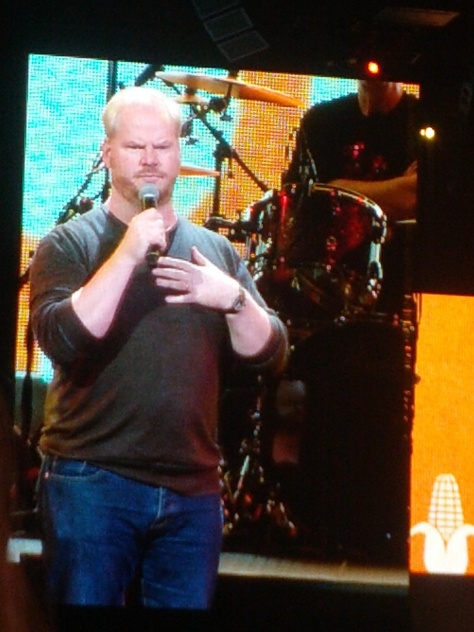 None of the comedians were on stage more than 15-20 minutes and all of them left us wanting more. Leary came out again to close out the evening with a rendition of his song “Asshole,” which was unfortunately hard to hear over the band. The big finale was all the comedians coming out on stage and being joined by the Boston Bruins. I unfortunately don’t follow hockey, so I was less impressed by this than most people in attendance. Regardless, my friend Laura and I had a great time and have decided to make this an annual tradition; we may have missed the first 19 years of Comics Come Home, but we’re on board for the next 19. It was a great evening with great comics for a great cause. It doesn’t get much better than that.

All the comics joined by the Boston Bruins