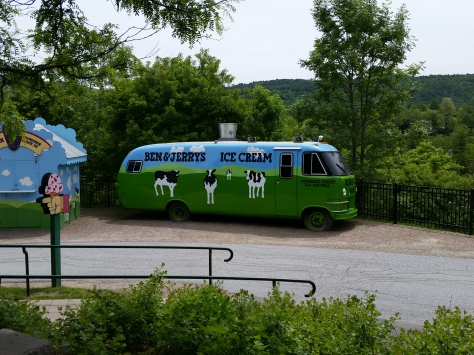 My road trippin’ ways continued this past weekend with a visit to Burlington, Vermont. I hadn’t been to Burlington in a long time and the last time I was there I was really only passing through. I’ve been wanting to go back for a while, so when a friend from college and I were trying to come up with a place to meet up for the weekend, Burlington was at the top of my list. The craft beer brewery industry is strong in Vermont and I do love sampling beers, but the main reason that I wanted to go to Burlington was because that put me in close proximity to the Ben and Jerry’s factory. If you know me even a little, you know how much I love ice cream in general, but Ben and Jerry’s ice cream specifically. Blame that on growing up in a city with its own scoop shop or the omnipresence of their pints, but in my lifetime I have consumed a disturbing number of Ben and Jerry’s flavors. I’ve been trying to get someone to go to the factory with me for years, but with no success; it was either too far to drive (it’s over 3 hours from Albany) or people just don’t want to see me happy. So I was beyond thrilled when my friend Michelle, my big sister in my sorority, was game to go, even though she’s been on the factory tour before. She’s a good egg.

We arrived at the factory shortly after 11, which seemed like a perfectly acceptable hour to me to start eating ice cream. We were able to hop on the 11:10 am tour, so our wait time was pretty minimal. Our tour guide was great – very enthusiastic and full of the showmanship and corny jokes that make tours like this entertaining. The first part of the tour was a short video about the history of the company and their corporate philosophy. I knew a lot of this already – I actually used Ben and Jerry’s as an example in my college courses when we discussed models of corporations – but it was still informative and not too long. I didn’t know, for example, that the first national attention that the company got was because the Ben and Jerry’s bus that they were touring the country with caught on fire and burned to the ground. That’s some unexpected publicity.

Next up was a tour of the actual factory, which was not in production because it was the weekend. Still, it was interesting to see the steps that they go through to create a pint of ice cream. There was another video which helped illustrate what each station does in the factory; they had helpfully numbered all the machines so it was easy to follow each stop that the ice cream makes along the way. I don’t know why I was so impressed to see that the machines that fill the ice cream pints twist the package as they are filled to insure equal distribution of the goodies inside – in retrospect that seems like common sense – but that was the fact that stood out to me the most. This portion of the tour was also relatively brief – possibly ten minutes maximum – and then it was on to the best part of the tour: the free sample.

I had secretly been hoping that we would get to try either a new flavor that wasn’t out yet or something that they were testing out, but that was probably not very likely. Instead, we received a health sample of Spectacular Speculoos, which might have been new to most people on the tour who don’t stalk new Ben and Jerry’s flavors like I do. It didn’t make it any less delicious – it’s hard to go wrong with cookie butter in anything – so it was a nice way to end the tour. In the sample room we also discovered that Ben and Jerry’s is trying out two new flavors in Texas: Bar-b-que Peach and Bourbon Pecan Pie. People will get to vote on which flavor they like best and the winner will be a limited batch only available in the Lone Star state. This piqued my interest, as I am a sucker for food that you can only get for a limited time (see also my obsession with all the new Oreo flavors and seasonal M&Ms). I also have friends in Texas who I am overdue to visit, so they may be getting a request to throw a pint in their freezer with the knowledge that I’ll eventually be on my way to claim it (especially if it is Bourbon Pecan Pie is the winner). Now I’m interested in finding out what other limited regional ice creams are out there that I don’t know about. This is a rabbit hole that I probably shouldn’t be going down. Ben and Jerry’s has more tricks up their sleeve than I realized.

The tour was over after the sample room, but since we were still in the mood for ice cream we took advantage of the scoop shop in the front of the building. They seemed to have every flavor currently in production, which of course makes sense, and it was kind of alarming to see how many of them that I had actually tried. It was a lot. I decided to take advantage of the fact that they had all the SNL inspired ice creams which are somewhat harder to find – I don’t think they are available outside of Scoop Shops – and try something that I hadn’t had before. I got one scoop of Wayne’s Swirled (dark caramel and vanilla ice creams with caramel and fudge swirls) and Lazy Sunday (Vanilla cake batter ice cream with chocolate and yellow cupcake pieces & a chocolate frosting swirl). I liked them both, but I REALLY liked Lazy Sunday, which really isn’t a good thing for me since the last thing that I need is another Ben and Jerry’s ice cream that I like. I’ll have to seek this one out again before they retire it from Scoop Shops. 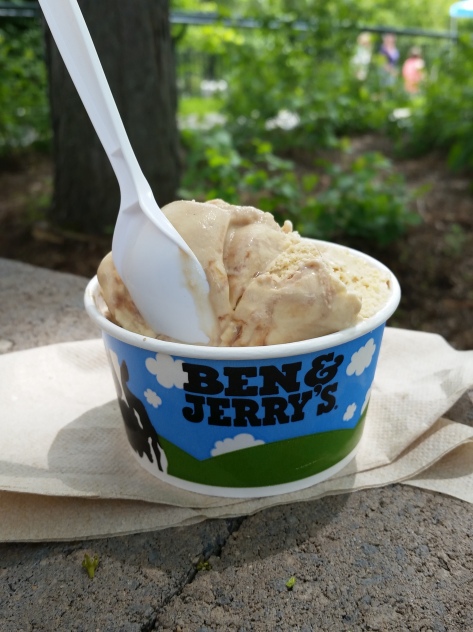 The final stop at the factory wasn’t part of the tour, but was only a short walk away – a visit to the flavor graveyard. This is where they pay homage to some of the Ben and Jerry’s flavors that have been retired. It’s not an inclusive list – not every retired flavor has a tombstone – but it was an interesting sample of some of the flavors that they have tried that didn’t quite catch on with the public. Someone was apparently particularly bummed out about the retirement of Chocolate Chip Cookie Dough Frozen Yogurt since that was the only “grave” that had flowers placed on it. That made us laugh.

There were some flavors that I was bummed out that I never had the chance to try; I’m guessing that I would have really liked Crème Brûlée, Aloha Macadamia or Chocolate Peanut Butter Cookie Dough. 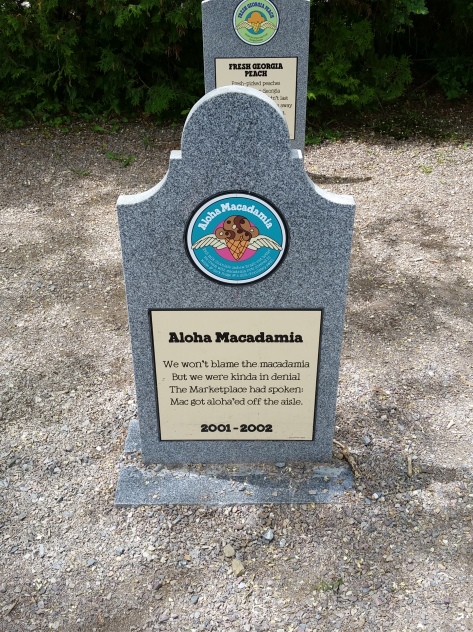 Others I’m less surprised didn’t survive. Tennessee Mud and Peanuts! Popcorn! are creative but too specialized for mass consumption, and I say this as someone who likes the salty/sweet combination that the latter flavor would have provided.

Some of the flavors in the graveyard have found a new life in a slightly different flavor: Peanut Butter and Jelly is retired, but Peanut Butter Jam Session lives on. There were some other flavors that I could see poised for a reincarnation in the near future: Fossil Fuel would make sense to bring back in some capacity now since Jurassic World is about to be released. 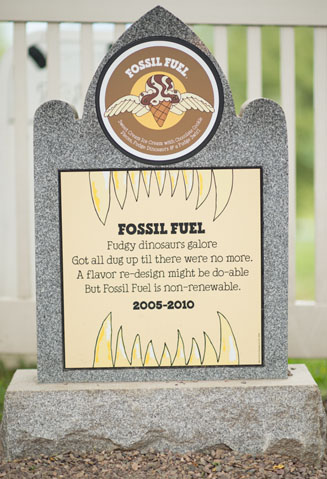 All in all, it was a fun day at the Ben and Jerry’s factory and I’m glad that I can cross it off my long list of things that I want to do. It might not have been the life changing experience that I had built it up to be, but any day that involves ice cream is aces in my book. Worth making the pilgrimage just to say that I did it and I got to try some new ice cream to boot. Not a bad way to spend a Sunday morning.

The Ben and Jerry’s Factory is in located in Waterbury, Vermont.