It’s kind of hard to believe that people feel sorry for a rich, young, handsome actor who seems to have his pick of roles and supermodels, but that’s the position that we find ourselves in when it comes to Leonardo DiCaprio. While the dominant buzz about the Academy Awards has been its failure to nominate any actors of color, the subplot seems to be concern over whether this is the year that DiCaprio finally brings home an Oscar. This narrative picked up steam after 2014, when DiCaprio was nominated (and lost) for Wolf of Wall Street. People were suddenly very invested in whether he would ever win the Oscar and instantly Leonardo DiCaprio was cast in perhaps the most interesting role of his life – underdog.

I’m guessing that people are as interested in this Oscar storyline as they are because it kind of feels like DiCaprio just should have an Oscar by now. Sure, there have been some clunkers on his resume, but overall he tends to pick quality projects that he’s good in. In fact, looking over his roles, especially of late, it’s hard not to think that his choices haven’t been curated for maximum award appeal. He has notably turned down some pretty iconic roles in blockbusters – smart move in passing on the Star Wars prequels – and instead has carefully selected more “prestige” projects, often with his directorial muse Martin Scorsese (a man who also knows a little something about waiting for an Oscar win). Honestly, it’s a little surprising that his nomination this year is only his fifth acting nod from the Academy – and one of those was for Blood Diamond, which is not one of his best performances. Perhaps the Academy has decided that DiCaprio is already living a pretty charmed life and his Oscar drought will make up for his abundance of riches. Build character. Humble him. It’s possible that we are all far more upset about DiCaprio’s failure to win than he is and that we are projecting on to him our own need for approval and recognition. I sincerely doubt this is in fact the case, but it is plausible. Maybe he isn’t chasing that sweet Oscar gold like we think.

It turns out that whether or not Leonardo DiCaprio’s sense of self-worth is intertwined with validation from the Academy of Motion Pictures is a moot point. Because the first thing that I tell people when they ask my thoughts about The Revenant is that the streak is about to come to the end. By the end of the 2016 Oscar telecast, Leonardo DiCaprio will be an Oscar winner.

And if he somehow doesn’t win, I don’t know what he’s going to have to do to get one. He may have to literally die on camera. 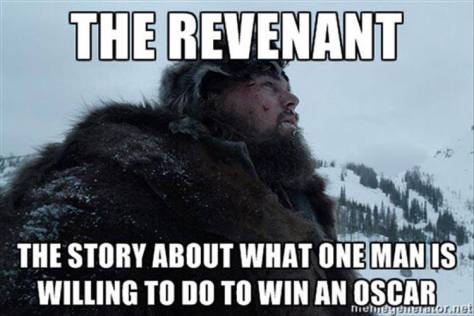 The Revenant seems to be a divisive movie; the people that I’ve talked to have either loved it or straight up hated it. I’m something of an anomaly in that I generally liked the movie, but wasn’t blown away by it. The detractors of the film have some points – The Revenant is way too long and the story meanders at a molasses-like pace – but ultimately I think that it is worth the extra effort to stick with the movie. It’s beautifully shot, well-acted and I became far more invested than I anticipated in the story and the outcome. The Revenant is not necessarily an easy watch; it punishes its actors and by extension it punishes its viewers. It is an endurance test for everyone involved. This is a raw story with plenty of violence and suffering, but it’s also a story of survival and revenge.

The Revenant is the story of Hugh Glass (DiCaprio), a guide for a hunting party in the wilderness of Montana and South Dakota. He is accompanied by his teenaged son Hawk (Forrest Goodluck), who is the product of Glass’ relationship with a Pawnee Indian. The group is under siege by the Arikara Indians and forced to flee after losing many of their men and supplies. The commander of the group (Domhnall Gleeson) puts his faith in Glass for getting them to safety, which doesn’t sit well with trapper John Fitzgerald (Tom Hardy). Fitzgerald thinks he knows better and is far more concerned with their payday than the chain of command. When Glass is grievously injured and vulnerable, Fitzgerald takes advantage of the situation to kill Hawk and leave Glass for dead. Glass, however, isn’t so easy to kill and het sets off to seek revenge on the man that killed his son – assuming that he can survive the brutal wilderness.

What I think is most interesting about DiCaprio’s stellar performance is how different it is from anything that he’s done before. Most of the acting is physical; there are long stretches of the film where DiCaprio utters no actual words other than grunts. His dashing good looks do him absolutely no good in this movie as he is dragging his body across a frozen tundra or trying to survive being swept into rapids. Glass is put through the ringer physically and emotionally, which DiCaprio is beautifully able to convey. It was kind of fascinating to see an actor stripped of all his obvious strengths and give this very raw and primal performance. Shooting this film was apparently hell and while I wouldn’t wish that on anyone, the results are on the screen. You can see why DiCaprio would accept this challenge – not just for the potential Oscar bait, but for the challenge of it all. The Revenant pushes him in a way no other movie he’s ever done could.

Tom Hardy is also truly fantastic in this film; while DiCaprio is getting a lot of (well deserved) attention for his role, Hardy is the secret weapon of this movie. Hardy doesn’t have to run the gauntlet like DiCaprio, but his performance as the man who sets everything in motion is just as important. I am constantly impressed with Hardy’s ability to seemingly play everything and he quickly makes Fitzgerald a memorable character. You can’t take your eyes off him and he provides a necessary counterpoint to DiCaprio. He completely disappears into the role. Hardy’s nomination is just as deserving.

As spectacular as the acting performances are, The Revenant is a director’s movie and Alejandro González Iñárritu creates a cinematic masterpiece. This film is brutal, but it is also absolutely gorgeous. Iñárritu’s decisions behind the camera lead to some truly remarkable shots that makes this movie more visceral and intense. The camera occasionally gets so close to DiCaprio that his breath almost frosts the camera and the choices made in the point of the view of the bear attack make that scene much more visceral. The camera work in The Revenant takes this movie to the next level.

That being said, I do think that The Revenant could have been about 45 minutes shorter. There are definitely some slow moments and diversion that if removed would have told a more efficient story. The Revenant is punishing, but I think it would have been just as effective with less flashbacks and long pauses. I’ll admit that there were moments where I was a little bored and my mind started to wonder. Two hours and 45 minutes is a lot to ask of an audience, especially for a move that is as draining as The Revenant. Streamlining the story, just a little, might have pushed this film closer to a masterpiece.

The Revenant is absolutely not for everyone. It is long. It is violent. It is occasionally slow. Animals are killed (not gratuitously). You will probably walk out of the theater somewhat emotionally exhausted. For me, the journey was absolutely worth it. The performances were top notch and by the time the climactic final scene occurs, I was completely stressed out and had absolutely no idea what was going to happen. It’s not a movie I could ever imagine myself revisiting, but I’m glad that I saw it. The Revenant is challenging and draining, but I couldn’t pull myself away.