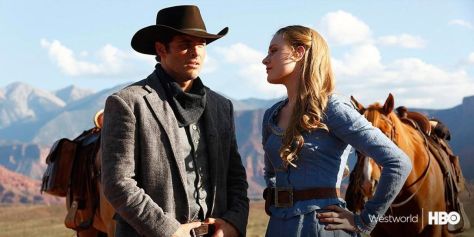 Sunday night HBO debuted their new sci fi/western Westworld. There’s been a lot of hype around this show and not all of it has been positive. It’s no secret that HBO is looking for their next big drama, especially now that Game of Thrones’ days are numbered *sob* and they had a pretty high-profile flop with Vinyl, which despite its expensive price tag, solid cast, and pedigree was a huge mess. True Detective looked like it could be a flagship show after its first season, but went off the rails in its second season and now has an unclear future. Westworld wasn’t a cheap investment for the network; its pilot alone cost about $25 million and the estimated cost for the entire first season hovers around the $100 million mark. The road to debuting Westworld hasn’t been smooth either; the show was originally supposed to hit the airwaves in 2015 and production was shut down earlier this year to rework some of the scripts. With expectations high and an ever higher price tag, there was a lot of pressure on Westworld to be the newest watercooler show. Could it live up to the hype?

Admittedly, I wasn’t 100% sure if Westworld would be for me. While I didn’t know a ton about the premise of the show, its science fiction bona fides gave me some pause as that isn’t a genre that I am necessarily at home in. Of course, I didn’t think I really liked fantasy either, but I’m a huge Game of Thrones fan, so I was willing to take a flyer on the show even if it didn’t automatically scream my name. HBO had done a great job with westerns with Deadwood and if they had any of that magic left in the bottle, Westworld would be worth at least a glance.

Generally, Westworld is about a fictional theme park that has the feel of the old west and that is populated by realistic robots (aka Hosts) that cater to the whims of the paying visitors (aka “Newcomers”). The Newcomers can do whatever they wish to the Hosts without fear of retribution; some Newcomers use this as a chance to fulfill their Wild West fantasies, some of which are a lot darker than others. The series also focuses on the programmers that oversee Westworld and how they handle bugs in their androids – which are becoming more frequent. The series boasts a huge cast and includes Evan Rachel Wood, James Marsden, Ed Harris, Anthony Hopkins and Luke Hemsworth (a third Hemsworth brother!). The show is modeled after the 1973 movie of the same name from Michael Crichton (which I haven’t seen).

There was a lot to pack in the pilot episode and while it didn’t all work for me I’m definitively in to see where the series goes from here. The premiere episode is absolutely gorgeous; it’s clear that the higher end cost was money well-spent. The science fiction aspect so far hasn’t been too overwhelming; robots and artificial intelligence are in the wheelhouse of what I can comprehend. I liked that there was initially some ambivalence about who in the cast is a Host and who is a Newcomer, as well as what people’s true motivations are. The actors all do a great job and I’m already intrigued about what this all means and they journey that the storytellers are taking the viewer on.  Because there is so much ground to cover and so many characters to introduce, some of the plotting was slow going or a bit repetitive; I’m hoping that is just a momentary setback and not a series-long issue. There is definitely sex and violence on the show, including sexual violence which may be disturbing to some viewers. There is an implied sexual assault that happens off-screen in the pilot that wasn’t necessary for character development or plotting– it’s already pretty clear that the perpetrator is not a good guy before the incident. But overall, despite some missteps, I’m in on Westworld for the foreseeable future. The show has real potential and has already sparked numerous fan theories after only one episode. I feel much more confident about this show than I did after watching the first episode of Vinyl, which may be a harbinger of better things to come.

Now it’s your turn – what were your initial reactions to the Westworld pilot? Does it get a season pass on your DVR or was it not for you? Let us know what you liked or didn’t like in the in comments.