This weekend, something truly amazing happened – I managed to completely clean out my DVR. Though I usually like to keep my DVR as empty as possible, there is inevitably always some programs that I just don’t get to in a week since – as you may have surmised – I watch a lot of TV. But since most of my plans are on hold for a while due to my broken ankle, I spend a lot less time out and about and a lot more time laying on the couch. So it was probably only a matter of time until I finally got myself caught up; Notre Dame football having a bye week this weekend and The Tonight Show being off last week certainly helped. This meant that I had some extra free time to check out the first few episodes of Amazon’s new series The Man in the High Castle.

Based on the novel by Philip K. Dick, The Man in High Castle imagines an alternative history in which the United States lost World War II. Instead of the nation that we know today, the U.S. was broken into three sections after the war – the Nazis rule over the East Coast, South and most of the Midwest, the Japanese Emperor has taken control of the West Coast, and a neutral zone (around the Rocky Mountains) divides the two. The series takes place in 1962 in an America that looks vaguely like the one that we are used to, but is under totalitarian control and has the influences of the regimes that govern. It’s a little disconcerting to see Times Square with Nazi propaganda. There is an underground resistance movement that looks to change things, especially with Adolph Hitler’s health worsening and concerns that whoever is his predecessor will simply drop a bomb on the United States and be done with it. There are also tensions between the Japanese and Nazis, who have peacefully coexisted for the most part, but the uncertainty about the future threatens this détente. Further adding to the unrest are a series of film reels that are allegedly created by “the man in the high castle,” which have news footage that shows a U.S. actually winning World War II. Hitler wants all these films destroyed, while citizens who see the film are inspired by this vision of what life could have been. Members of the resistance are smuggling these reels and anyone caught with them is surely to be executed.

I watched the first two episodes of The Man in the High Castle and while it is something of a slow burn it absolutely drew me in and made me want to see more episodes. The pilot episode does a really great job of world building and introducing the main characters. There are a lot of twists and turns – people may not always be who they say they are – but that only adds to the intrigue. All of the performances are great and most of these actors were new to me (the exception is DJ Qualls, who you might know from Road Trip or the series Legit (R.I.P.)). This film is absolutely beautifully shot and a lot of thought went into the creation of the sets and the set design; they did an excellent job of creating a bizzaro U.S., where there are hints of the world as we know it as well as the imprint of the new leaders. Also impressive is the mood of paranoia that the series effortlessly creates; because things unfold slowly – though there are spurts of action – there is time to let things simmer and build the tension and unease. I found myself liking some of the characters, but trusting absolutely none of them, which is the sign of a good espionage film or series. There is a surprise at the end of the first episode that I didn’t see coming, but wasn’t necessarily unexpected given the suspicion that is built into the show.

I’m definitely looking forward to watching the rest of the series to see how this all shakes out. It’s a fascinating alternative reality that they have created in The Man in the High Castle and I haven’t been able to stop thinking about the series since I’ve watched it. The downside is that you need to be an Amazon Prime member to see it, which isn’t necessarily inexpensive. I tend to fall off the wagon with online series; I’ll start watching something online and then kind of forget about it. I’m still kind of old school in that way – if it’s not automatically showing up on my DVR, I may not get around to it (especially if all the episode aren’t dropped at once so I can binge watch). However, I was into The Man in the High Castle enough that I think I’ll make more of an effort to see this through. I’ve never actually read any of Philip K. Dick’s work, but I do tend to enjoy the adaptations (Minority Report, Total Recall, A Scanner Darkly). The Man in the High Castle offers an interesting dystopian future that is grounded enough in reality that I think it’s pretty accessible. I look forward to seeing where this story takes me.

Episodes of The Man in the High Castle will be available through Amazon Prime on November 20th.

Today, I received the email that I have been dreading: 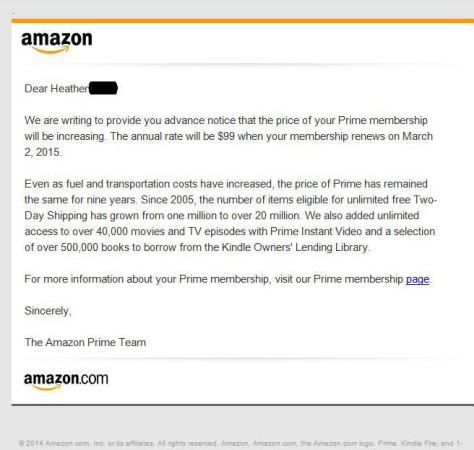 After hinting that a price increase for their Prime membership was on the horizon back in January, it looks like Amazon has made that a reality. The yearly cost for Prime membership will now be $99 – up $20 from the current rate of $79.

I have been lucky that I have been able to enjoy the perks of a Prime membership without ever having to pay the full membership price. I was able to get free Prime for a while because of my university affiliation and then was grandfathered in under the student rate once my free period was over. It’s been quite a luxury to order most items from Amazon and getting free two day shipping without having to meet a minimal purchasing requirement. It certainly lends itself to more impulse buying, which for me is never a good thing.

Amazon Prime does come with a number of perks – there are lots of TV shows and movies that are free to stream for Prime members, though admittedly I have not taken full advantage of this. There is a fair amount of overlap with what I can stream through my Netflix and Hulu Plus accounts, so I haven’t fully explored the Amazon streaming experience. As they have expanded their offerings to include more original programming, I have started to pay more attention to what they have to offer. I still haven’t completely trained myself to think of streaming the same way that I think of cable, however, and though I enjoyed their program Alpha House I never finished watching all the episodes of the first season. Amazon has also gotten into the show saving business when they picked up the BBC series Ripper Street after it had been canceled. Kindle users also get access to a borrowing library with a Prime membership that allows them to read books for free.

These are all nice options to have, but the impending price hike makes me have to reevaluate if Prime is worth almost $100 a year. While I am clearly aware of all the benefits that come with Prime, I don’t make a regular habit of actually using them. Right now, even at a discounted rate, I’m primarily paying for the shipping benefits; the other stuff is nice in theory but I haven’t fully maximized my membership value. Over the course of the next year, I’m going to really have to take stock of my Prime habits and make more of an effort to utilize all the services that I’m paying for. If after that year I find that I’m still not streaming or using my Kindle more often, it might be time to bid adieu to my Prime membership. While the difference is only $20 a month, there is something psychological about paying nearly $100 that makes the investment in Prime seem less worthy.

If you are thinking about joining Amazon Prime – act now. New users have one week to join at the current lower membership rate; anyone joining after this grace period will automatically pay the $99 annual fee.

Does the price hike impact the likelihood that you’ll keep your Prime membership? Is it worth the price increase or does it discourage you from signing up? Sound off in the comments below.