Thanks to some downtime on planes and a three-day weekend, I’m pretty close to caught up on all of my shows. Of course, it helps that most shows are wrapping up their seasons and a lot of summer shows haven’t started yet, so there aren’t new things piling up on my DVR (though I haven’t started the new season of House of Cards yet, which is driving me crazy). The last few days I have been binging Starz’s adaptation of American Gods, which I have to say that I am really enjoying. I hadn’t read Neil Gaiman’s book and honestly wasn’t sure what sure what to expect from the series, but so far it’s really pulled me in. On paper I’m not sure that this is a show that would appeal to me, but I’m glad that I took a flyer on it. The pilot episode is definitely a little bonkers and four episodes in I can’t swear that I truly understand everything that is happening, but I like the ride that they are taking me on especially since I have no idea where its going. Good stuff.

Also good – this week’s pop culture roundup. The holiday weekend put a slight damper on the quantity of pop culture news, but certainly not the quality. So get yourself caught up on everything that you may have missed with the new edition of the week in pop. 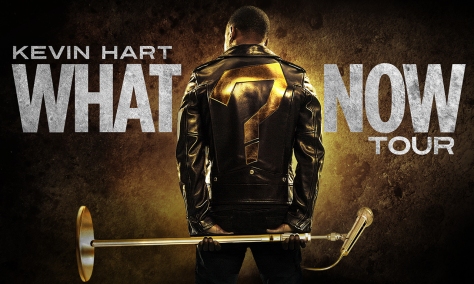 Kevin Hart takes the use of cell phone during his show very seriously. Like, really, REALLY seriously. From the moment I set foot in the arena for his show last night, every security guard I passed asked me if I knew about the cell phone policy and the consequences. There were signs all over the arena warning that anyone even seen with a cell phone during the show would be kicked out automatically and would not receive a refund. It was announced repeatedly before the show and the opening acts reiterated it, giving us an updated number of how many people had already been kicked out of our show (16) and how many people they kicked out in Syracuse (150). During the show, security guards continuously walked up and down the aisles, shining flashlights and on high alert for that telltale glow of a cell phone screen. I had no intention of looking at my phone – I am nothing if not a rule follower – but even though I had not thing to worry about these draconian methods were beginning to get me agitated. I would not flourish in an authoritarian regime; the pressure of compliance would give me anxiety.

I totally get where Hart and his team were coming from; I’m sure that there is nothing more frustrating for a comic than to be debuting new material and then have it posted all over the internet the following year. The proliferation of social media has made a comedian’s job a lot harder. Comics could do the same 90 minute set for years because it was new to the audience. Now your material is old after a few nights because people have heard the jokes by watching grainy cell phone footage of a previous show. So I don’t begrudge Hart’s desire to prevent that as much as possible. But it certainly didn’t cultivate the ideal conditions for comedy. You’re not necessarily in the mood to laugh when security guards are circling you like vultures, waiting to swoop in. So it’s a true testament to Kevin Hart that he not only overcame the weirdness but put on one hell of a show. The weirdness may have been of his own making, but he almost made me forget about the Dementor-like guards patrolling the aisles (except for when they blocked my view ever ten minutes as they made another lap of our section).

For all the increased security and concern about recording the show to protect his new material, I found it ironic that Hart actually kicked of the show with material that he already did when he was on Saturday Night Live earlier this year. It was still very funny, but given the constant refrain that he was doing new material for us, I chuckled to myself when he launched into some stories that I has actually already heard. Perhaps that was intentional – it gave security time to get rid of people that might be hell-bent on recording or taking a photo before he got to the actual new stuff. If so, well played Mr. Hart. Well played.

Kevin Hart has been at this long enough that he knows what he’s doing and his set last night was tight and consistently funny. He’s more of a storyteller than a joke teller, per se, and it’s been interesting to see how his material has changed as he’s become more famous. Now that he’s consistently starring in movies and has made a name for himself in stand up, in addition to just getting older, there has been a tonal shift in what he makes people laugh about. The focus of this tour is on his family; his children and fiancée dominate much of his routine, with some guest appearances from his father and his buddies. Even with this more domesticated focus, he still had the audience in stitches the entire night. I often times find that a little of Hart (no pun intended) goes a long way in movies, but I really enjoy his persona in a stand up setting. His face is so expressive that it helps sell a lot of his jokes; sometimes his reaction is all that is needed to make people laugh. He’s also masterful at working in references to earlier jokes throughout his set. The callbacks don’t feel forced and by the end of the night, the audience was saying some of the lines right along with him. His storytelling was as memorable as it was funny; I was regaling my assistant with some of the bits that I thought were particularly funny and I was surprised just how much of his set that I remembered, almost word for word. I was particularly tickled with his story about what he would do if his fiancée was attacked by a shark (her hypothetical), his “debaucherous” night of playing ping pong with his pals as well his recounting of the time his fiancée put a sex toy in his luggage while he was away on location for a movie. Those were highlights, but the entire evening was a well-constructed night of comedy. I laughed so much that I almost forgot about my stupid sprained ankle, which is saying a lot.

I was less impressed with his openers, a trio of comics referred to as the Plastic Cup Boyz. Joey Wells was the first to perform and also served as something of an emcee and was the strongest of the opening acts. Both Na’im Lynn and Spank Horton made jokes about gay and transgendered people that I didn’t find particularly enlightened or funny, which I could have overlooked if the rest of the material was stronger. I was actually a little worried about the evening after they performed, but Wells returned to the stage to do some additional material about the cell phone policy that helped alleviate my concern.

Kevin Hart is very good at what he does and last night was no exception. He appeals to a lot of different kinds of people, as evidenced by the very diverse crowd that was in attendance. Hart was funny and energetic and certainly gave the sold out crowd more than what they paid for. I’d absolutely go see Kevin Hart perform again – though just to be safe I might leave the cell phone in the car.

Kevin Hart is currently touring the U.S. with the What Now? Tour.