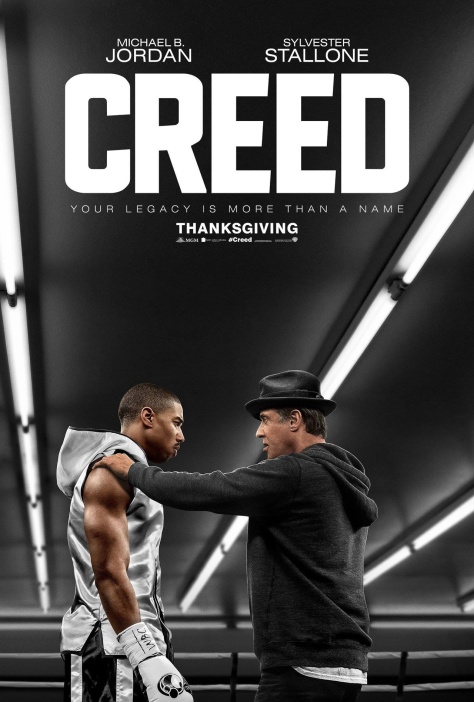 When I was five years old, I was friends with another little girl with whom I occasionally used to go to the movies. Growing up, I didn’t go to the cinema very often – if we did go to see a movie, it was more than likely at the drive-in – so this was a special treat. She and I would take turns picking what movie we would go see and our parents would alternate who was responsible for taking us. When it was her turn, she selected a re-release of Alice in Wonderland, marking my only exposure to Disney movies until I was a teenager. When it was my turn to pick, I selected Rocky III – what can I say, I was a weird kid. Her father, who was in charge of chaperoning this particular film outing, was pretty over the moon with this choice and I cemented myself as a cool kid in his eyes. I hadn’t seen any of the other Rocky films, so I’m guessing my pick had more to do with Mr. T and Hulk Hogan being in the movie than anything else; regardless, a Rocky fan was born. I would eventually go on to see all the rest of the films in the franchise, with the exception of Rocky V, which I think we as a nation have just agreed to pretend never happened.

But while I enjoyed all of the Rocky installments, by the time 2006’s Rocky Balboa came out I was curious if there were any more stories left for this franchise to tell. I really liked Balboa, but it seemed like a fitting ending point. The story had basically come full circle, with Balboa nicely paralleling the original Rocky. When I heard that a new film about Apollo Creed’s son was moving forward, I was dubious that they could wring that much more out of a franchise after nearly 40 years and six movies deep. Hollywood hasn’t exactly been bursting with original ideas the last few years, so I went into Creed prepared for a rehashing of Rocky’s greatest hits and a reliance on nostalgia rather than storytelling. I was rooting for Creed to at least be watchable, not only from an affinity for the franchise in and of itself, but because of an affinity that I had for star Michael B. Jordan. Fresh off the heels of the disastrous Fantastic Four reboot, I didn’t want another disappointing film to tarnish his career. If Creed was mediocre, I was ready to call that a win for all involved.

What I had not prepared myself for Creed to win me over completely, not by decision but by knockout. This film not only reinvigorates the franchise in a way that I didn’t think was possible, but has a different spin on the story and offers a different perspective. Creed is full of fantastic performances, led by the always great Michael B. Jordan, who managed to transform himself mentally and physically into a fighter. This may also be the best performance of Sylvester Stallone’s career and the performance shows a lack of vanity as his Rocky is an older guy facing health issues. Though I’m sure Stallone could still punch a dude out if he had to, he allows himself to be less than vital in this film and assume basically the role of Burgess Meredith from the original Rocky. Creed in many ways is the symbolic passing of the torch and they handle that transition flawlessly. There is enough for Stallone to do so that he doesn’t feel superfluous – he has his own emotional arc in the film – but this is most decidedly Jordan’s movie.

In Creed, Jordan plays Adonis “Donny” Johnson, the illegitimate child of boxing great Apollo Creed. Donny has no idea who his father is, as Apollo was killed in a fight before he was born, but he is innately drawn to boxing. The kids just loves to fight and that feeling doesn’t subside once he discovers his paternity or is provided every advantage in life. Over the objections of his family, Donny quits his well-paying white collar corporate job to devote himself to boxing full time. When no local trainers will work with him, he packs up his things and seeks out his father’s friend and rival Rocky Balboa in Philadelphia. Rocky had no idea that Donny existed and is not initially interested in training the newcomer. However, much like Donny, Rocky can’t ignore the call of the boxing ring and eventually concedes to becoming his trainer. Donny also becomes romantically involved with his neighbor Bianca, a singer-songwriter who is also chasing her dream at all costs. In a lot of other movies, the role of Donny’s girlfriend would be a thankless performance, but in Creed they spend the time to make Bianca a fully realized character as well and respect her enough to be interested in her perspective and views. She isn’t just there to tell Donny not to fight or to give him someone to come home to; it’s a small thing, but an important distinction.

I enjoyed Creed immensely, but I did not anticipate my fondness for Jordan making the boxing scenes somewhat difficult for me to watch. I’ve been a fan of Jordan since he debuted on The Wire in 2002 as Wallace and have followed his career ever since. And while I can tell the difference between fiction and reality, it somehow did not make me any less anxious during Donny’s climactic boxing match; every time Donny/Jordan took a punch to the face or a particularly brutal body shot, I became incredibly anxious. I noticed that I was literally sitting on the edge of my seat and had to fight the inclination to cover my eyes. For someone who is normally pretty immune to violence on the big screen, this is a testament to how realistic the character of Donny became. Sure, I have a soft spot in my heart for the actor, but my reaction was more than that. Creed made me care about Donny and his physical welfare. I was totally invested and had no idea what the ultimate outcome would be. That’s good movie making.

Creed was way better than it had any business being; while this could have been a film that limped across the finish line as a final cash grab from Rocky fans, it instead pumped a whole new life into the franchise. The acting was stellar, the story felt fresh and original and I’m already hopeful that Creed II will be in development. Creed pumped me up and made me cry; don’t be surprised if Sylvester Stallone gets a nomination for Best Supporting Actor. Michael B. Jordan has solidified his place as a star and director Ryan Coogler has demonstrated that it is possible for relatively new directors to take over a major franchise and not crash and burn. It is amazing that this is only his second movie (his first, Fruitvale Station, also starred Jordan and was a very powerful film). I enjoyed this movie so much; everyone involved with Creed should be proud of the finished product. From top to bottom, it was an energetic, funny, touching and heartwarming film.