Since I didn’t know that one could make a living as a pop culture maven back when I was in college, I took a different path of majoring in both political science and economics. I was good at economics but didn’t necessarily enjoy it, so I chose to pursue political science when I went to graduate school, where I spent way too long pursing (but not actually completing) my PhD. Despite my training, I generally don’t like to talk about politics because its one of those topics where everyone considers themselves an expert even if they don’t really know what they are talking about. I especially avoid political threads on Facebook since that is usually an exercise in futility – people have their ideas and are unlikely to change them so it just dissolves into people trying to “get” their political opponents or a back and forth of pointing blame. The only time I’m compelled to swoop in is when I see some egregious factual errors and even then it has to really bother me to get involved. Biting my tongue is sometimes very hard and it’s been a very rough year as people have become more vocal due to the presidential elections and are getting their information from dubious sources. Some days I just want to force everyone to sit through one of my Political Science 101 lectures to just get the basics right.

Thankfully, pop culture offers me some salvation, which is ironic since people definitely have their opinions about movies, music and TV series (and I usually think that they are wrong about them). I guess because the stakes are low and so much is based on personal taste/opinion rather than cold hard facts that kind of discussion doesn’t bother me. In this week’s roundup I’ve cultivated plenty of info for you to talk about. So get yourself caught up on the pop culture stories that you might have missed while I take some Advil and stay off Facebook.

You know her name, but do you know her story? #BritneyEverAfter premieres, February 18th at 8/7c. pic.twitter.com/IADZsZe9x2

Most people have had a collection of some sort at some point in their lives. When I was little, I collected stickers, stamps and Garbage Pail Kids cards (the latter of which, according to Storage Wars, might be worth some cash if I can find them).  My shot glass collection was born out of a trip to Rome, Italy in high school and the desire to bring back some cheap souvenirs for my friends (a possibly troubling development for my parents – a fifteen year old with a shot glass collection might raise some eyebrows). That collection carried through into adulthood, until I moved multiple times and tired of packing up and transporting 50+ shot glasses. It’s a miracle that more didn’t get broken as they made their way to Oneonta, Connecticut and various places in Albany. RIP, shot glass from Japan.

Naturally, this was my favorite Garbage Pail Kid.

I thought I was retired from the collection game after I decided to stop adding to my shot glass collection. The downside of collecting something is that people keep buying things for your collection long after you’ve lost interest or have run out of space; it becomes an easy go-to gift for people, but sometimes you get tired of everyone giving you some variation of the same thing. So I was content to go about the rest of my life as a non-collector.

The bobblehead thing started off as a joke; a friend of mine gave me the Dwight Schrute bobblehead from The Office, which was featured prominently in the show. This was back when I was a really big fan of The Office and it was actually still really funny (ahh….memories). One bobblehead does not a collection make, however. Things escalated when the minor league team of the Houston Astros that plays nearby gave away bobbleheads of the local mayors as one of their promotions. I found this hilarious and decided that I had to get the bobblehead of the Albany mayor to see if they made his skin tone the right shade of orange to reflect his perma-tan (sadly, they didn’t). I decided that I had to get the complete set of the other two mayors; it was a fun excuse to go to some more games and it was such a weird thing to have that it made me laugh. Most people have bobbleheads of sports figures, while I had local political officials which seemed more fitting given my love of politics. I kept the bobbleheads in my office, as we do research on state and local government and I thought that was apropos. This would turn out to be a critical decision.

The bobblehead that started a collection.

My co-workers took notice of my burgeoning collection and the interns in the office took it upon themselves to give me the piece de resistance of my collection: a bobblehead of me! That Christmas, the little sneaks, with some assistance from other co-workers, took a photo of me and sent it off to some company in China that would create custom bobbleheads. They picked out what my outfit looked like (they thankfully went for the cute skirt option, since I always wear dresses or skirts at the office, rather than the bikini) and patiently waited for the bobblehead to be created. I knew that they were up to something, but I never would have imagined that this was what they were scheming. As many of them were leaving at the end of the semester, they expedited the shipping to make sure that the bobblehead was delivered in time for Chirstmas. When they gave it to me, I burst into tears – it was such a thoughtful gift and I knew that it was expensive especially on an intern’s salary. The company did a pretty great job – I have to say that the bobblehead actually looks like me, which cannot be said for a lot of the other items in my collection. 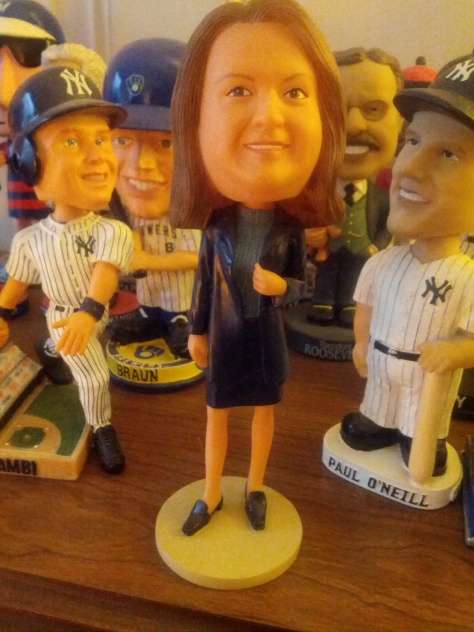 I assure you that my head is not actually this big.

Once I had my own personalized bobblehead, the collection sort of took on a life of its own. People started buying me bobbles for holidays, usually with a preference toward Yankee players. I continued getting bobbleheads at stadium giveaways and before I knew it I had a fairly sizable collection. We started referring to my collection as “the bobblehead army” and it has become a real conversation starter when people visit my office. One of my former student assistants even wanted to write a short story about what would happen if the bobbleheads came to life at night, like A Night at the Museum. People are fascinated by the collection and it has led to some interesting small talk over the years. I guess there aren’t a lot of women who collect bobbleheads as most people are surprised that this is my collection (though, it’s in my office, so who else’s collection would it be?). Fortunately my bosses have all been very cool with my collection and have even contributed to its growth; keeping the bobbles in the office also eliminated the worry about moving. I’ve lived in three different apartments since the collection started, but I’ve been in the same office that entire time. What people don’t know (until now) is that one entire drawer of the filing cabinet in my office is filled with bobblehead boxes, just in case I ever do need to move the collection to a new location.

Though most of my bobbleheads are related to sports or politics (I have both a Michelle and Barack Obama  bobblehead), I’ve started branching into the world of pop culture (naturally). I have a bobblehead of “The Old Man” from A Christmas Story, complete with the leg lamp. 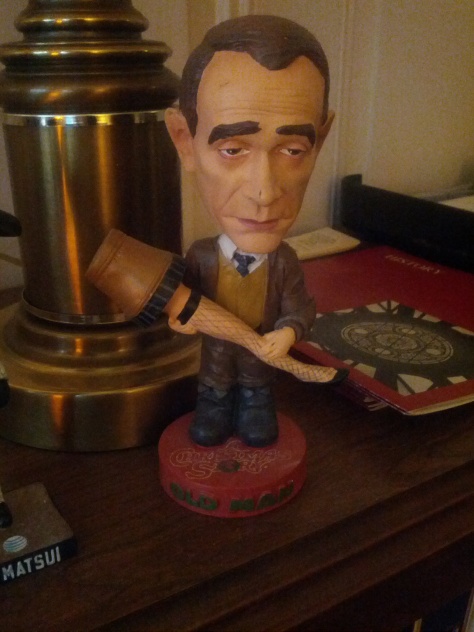 The Old Man from A Christmas Story

This weekend, I made the trek to Yankee Stadium, partially to obtain a bobblehead. The Yankees had discontinued their bobblehead giveaways for a while, but decided to bring them back this year (I’d like to think I had something to do with this). Sunday was the Hideki Matsui bobblehead; the former Yankee was signing a one day contract and then retiring so he could end his career as a Yankee (he left the team in 2009). There was a nice ceremony and his family flew in from Japan; a nice way to commemorate his career. I’m glad that I got to be a part of it, but it was the promise of a bobblehead that first convinced me to get a ticket for a game that was just a little over a week after my last trip to the Stadium. Thankfully, I was one of the first 18,000 people in the doors and added another member to “the army,” which has now spread to a second bookshelf. I’ve told my boss that I need a bigger office soon, not in reflection of my recent promotion, but simply to accommodate my ever growing collection. It’s a really good thing he has a sense of humor.

The bobbleheads also reflect how I feel about a certain person at any one time; the bobbleheads that closest to my bobblehead tend to represent my favorite people. My Ryan Braun bobblehead has been demoted to the back row after his steroid scandal (it probably should have been a sign that the Braun bobblehead had a huge head). I spent more money than I should have on a Paul O’Neill bobblehead on eBay, but I couldn’t imagine my collection without him. He’s now in a prime location in the front row.

I’m sure I’ll eventually tire of this collection as well, but for now I’m happy to keep selectively adding to it. The Army will gain yet another member in August when the Saratoga Race Track gives away a bobblehead of a horse, which will be my first non-human entry. I try to limit how many I buy as bobbleheads aren’t always inexpensive; I tend to focus on bobbleheads that mean something to me, like a favorite athlete or to commemorate a vacation. For example, I had to buy the Polish Sausage Mascot bobblehead after a road trip to Milwaukee.

To have walked out of Miller Park without it would have been sacrilege.

For now, I just know that coming to work is a lot more fun because of my collection. It’s now position so that it is in my sight line and it never fails to make me smile when I look up and see my very own mini-me. It is one of my favorite gifts of all time and reminds me of the thoughtfulness of others. Plus my bobblehead is a way skinnier version of me. 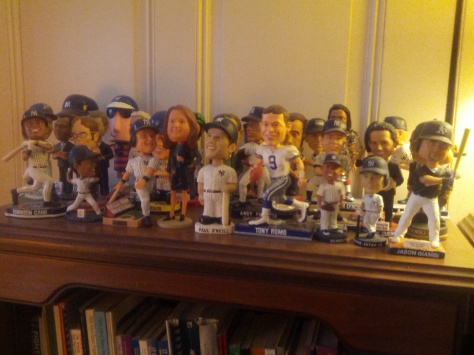 Do you have a pop culture inspired collection or do you think the whole collecting of items is silly and a waste of money? Sound off in the comments below. 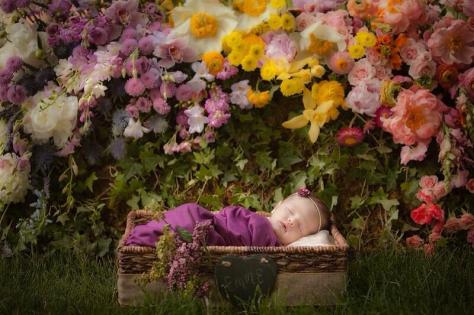 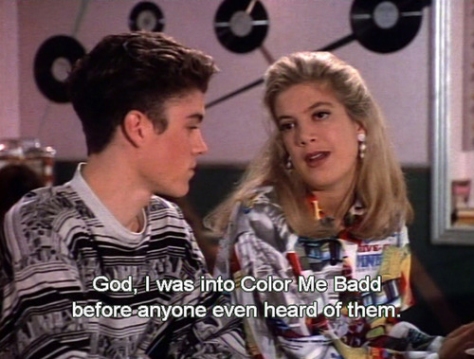