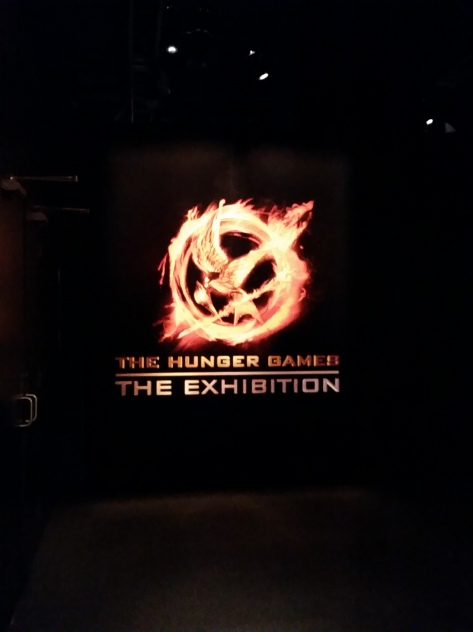 While I was in New York City on Thursday, I managed to squeeze in a lot of pop culture. I was in the city mainly to see two plays – more on that to come – but I also was hoping to squeeze in a stop at the newly opened The Hunger Games exhibition at Discovery Times Square . As much as I generally loathe going anywhere near Times Square, I do generally enjoy the exhibits that they put on at Discovery Times Square. Last year I went to see The Art of the Brick, which I loved, and since then I keep an eye on what they have to offer. As soon as I heard that they would be unveiling a The Hunger Games exhibition on July 1st, I knew that a visit was in my near future.

Now while I really enjoyed The Hunger Games books and the movie adaptions, I wouldn’t call myself a huge Hunger Games fan. Some people are really into this series, while I consider myself more of a casual fan. Part of that is because I am not in the target demographic for this franchise – I am always the oldest non-chaperone in the theater – and part of it is that because I consume so much pop culture on a regular basis, I don’t tend to revisit things. So while I definitely enjoyed The Hunger Games franchise (book and movies), I’ve only experienced them once; I haven’t re-read the books or given the movies a second viewing and I certainly haven’t spent any time pouring over the internet to find out more about Suzanne Collins and her inspiration for the books. I’ve taken the series at face value and haven’t dug much deeper.

The context of my fandom is important, because it directly impacted what I got out of The Hunger Games exhibition. While more hard core fans might have gotten bigger thrills over seeing some of the costumes or pouring over some of the minutia of some of the exhibition, I definitely felt like I learned a lot about what helped inspire both the story and the look of The Hunger Games. I’m always fascinated about the thought process that goes into production design and how they build the world, so I was particularly interested in the sections of the exhibition that discussed the real-life influences that created Panem and all the subsequent districts. I was not surprised to find that the Roman Empire played a big role in the look of The Hunger Games, but I didn’t know that the name Panem was also drawn from a Latin description of how Roman emperors kept the masses content. I’d heard the term “bread and circuses” before, but I didn’t know that phrase in Latin was “panem et circenses.” I should have paid more attention in Latin class so I would have made that connection on my own. I was also unfamiliar with the Greek myth of Theseus and the Minotaur that was a source of inspiration for Collins in writing the books. The people of Appalachia at the turn of the 20th century were the inspiration for the look of District 12 in the movie. That kind of info might not be very interesting to some people, but I love that kind of stuff. I’m always curious where writers find inspiration, since I know how hard that sometimes can be. So I felt like I walked out of The Hunger Games exhibition with a better understanding of where this story came from and their reference points in creating the people and places.

Of course, the flashiest part of the exhibition are the costume displays. Some were more recognizable to me than others – Woody Harrelson’s Haymitch isn’t exactly a snappy dresser – but it was still very cool to see some of the costumes that play a pretty integral part in the movie. There were also plenty of props and set designs, including those from a scene in the District 13 Hydroponics lab which was ultimately cute from the movie. There were interactive elements to the exhibition, where you could learn more about the tributes, the flowers and fauna (where may characters draw their names) and practice your fighting skills for the games. 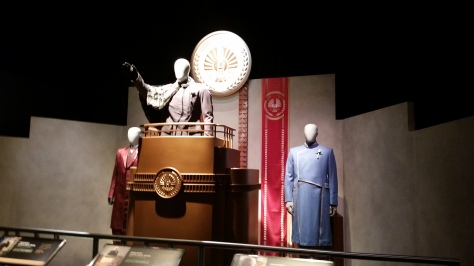 The many looks of President Snow 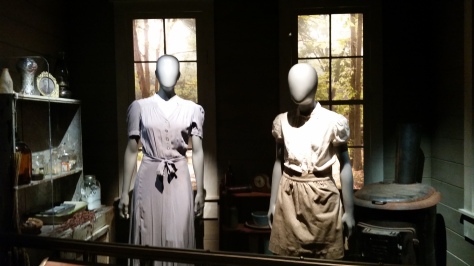 Katniss and Prim’s outfits for The Reaping in District 12. 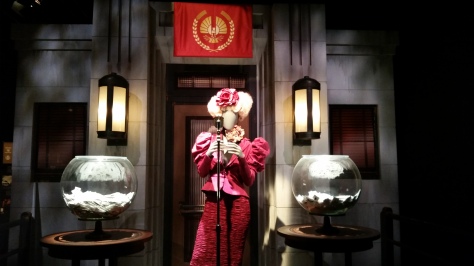 Effie’s outfit for the District 12 Reaping 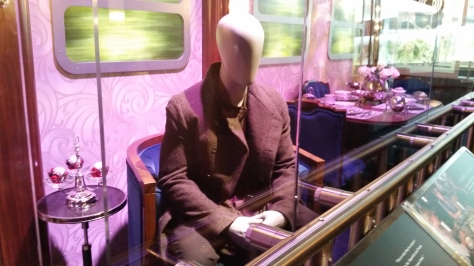 Haymitch’s outfit on the train ride to the Capitol. 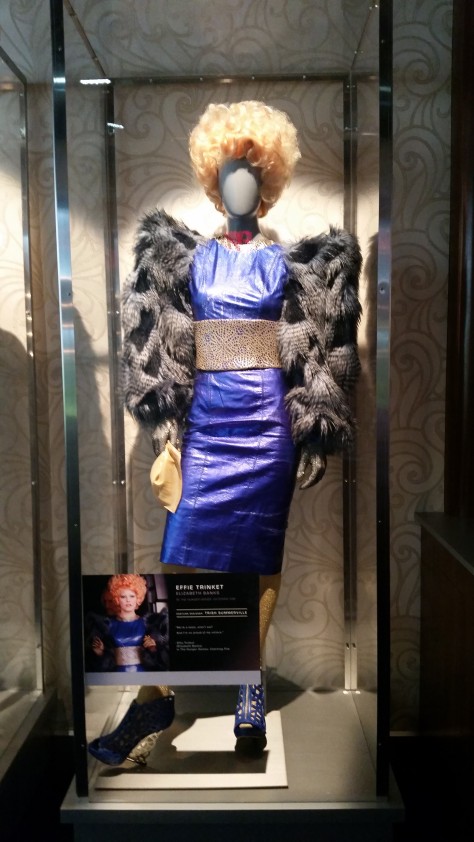 More Effie, who has the best costumes anyway 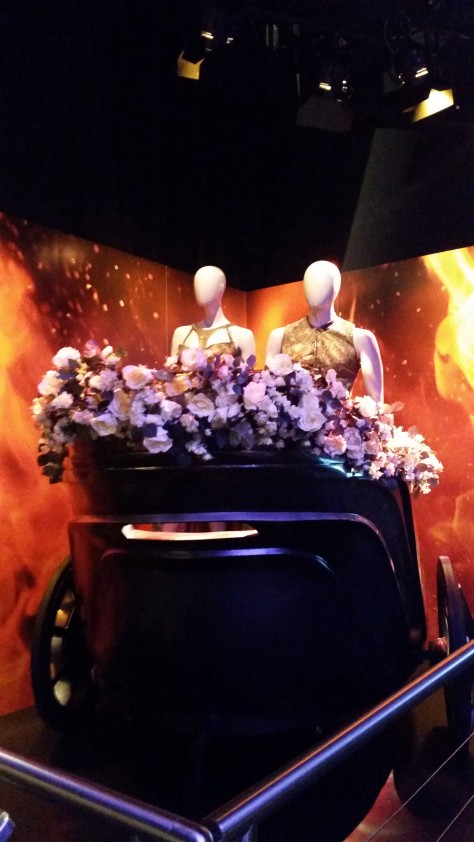 Katniss and Peeta’s outfits for the chariot scene 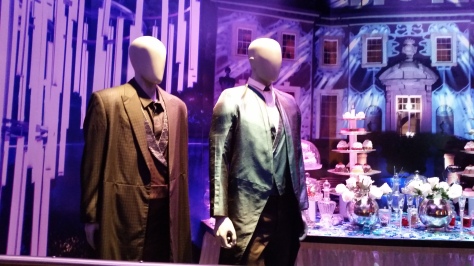 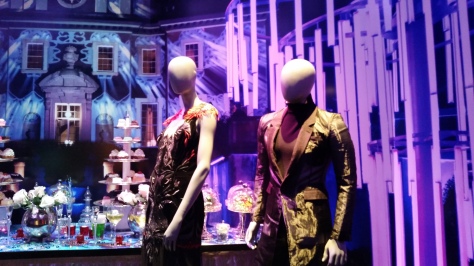 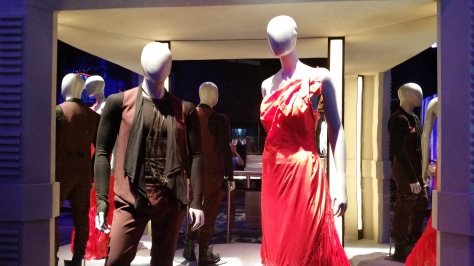 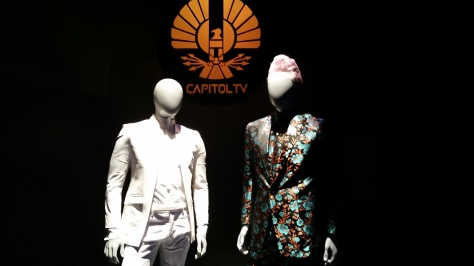 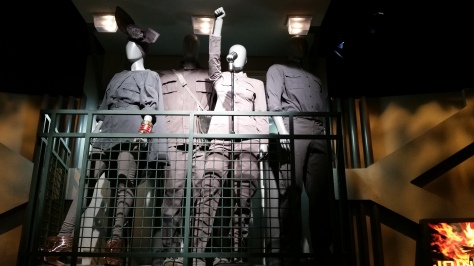 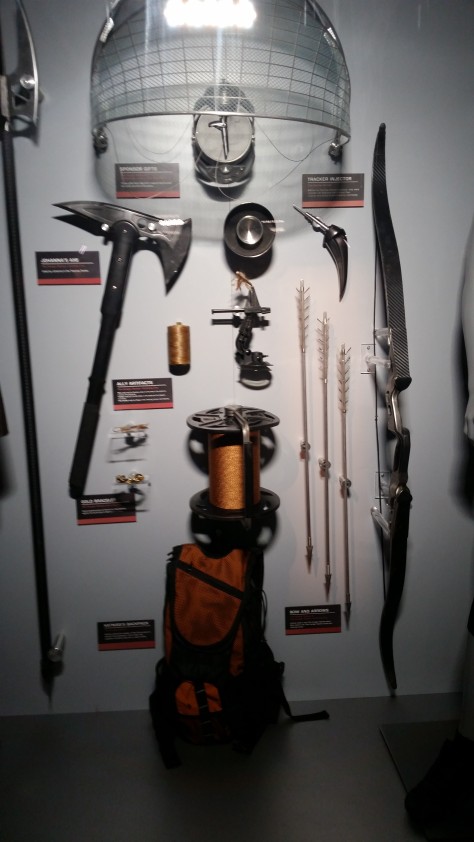 Weapons from the Hunger Games 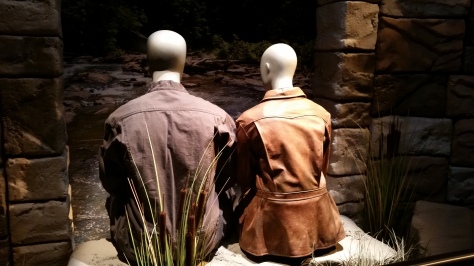 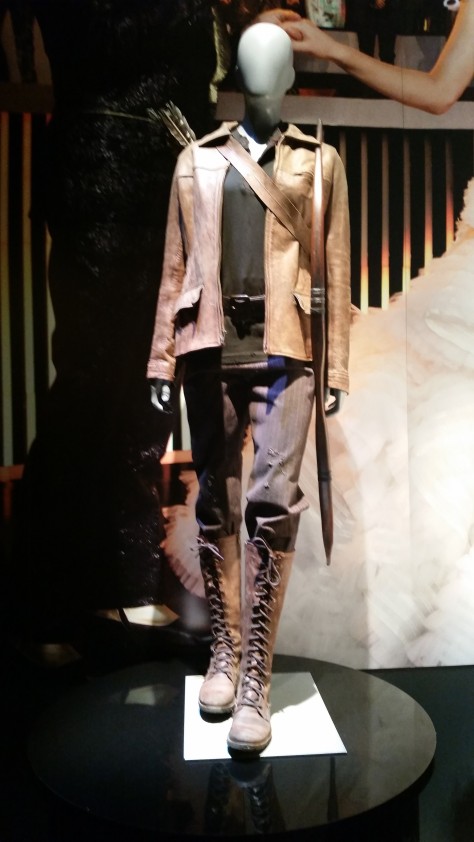 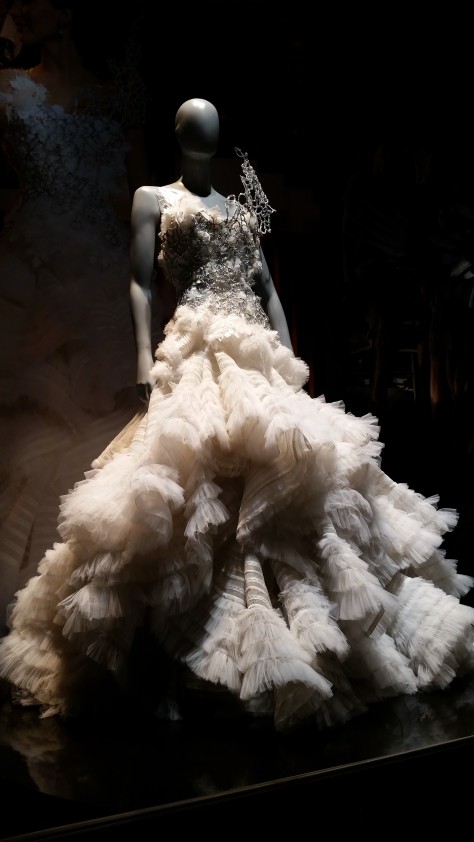 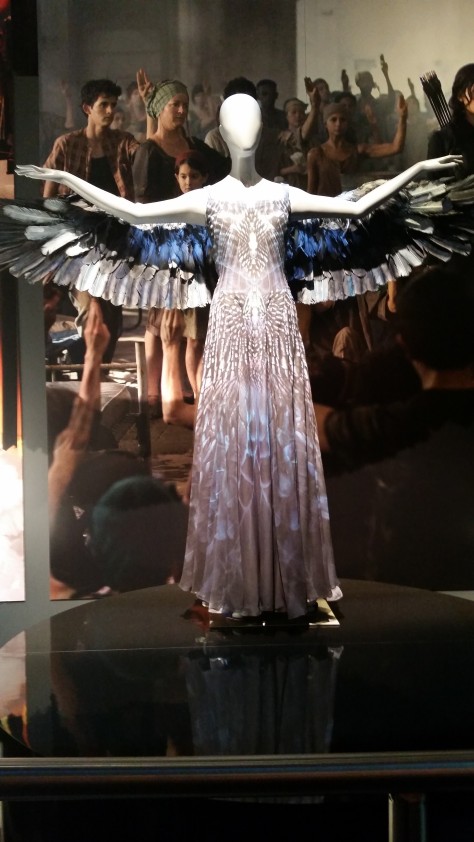 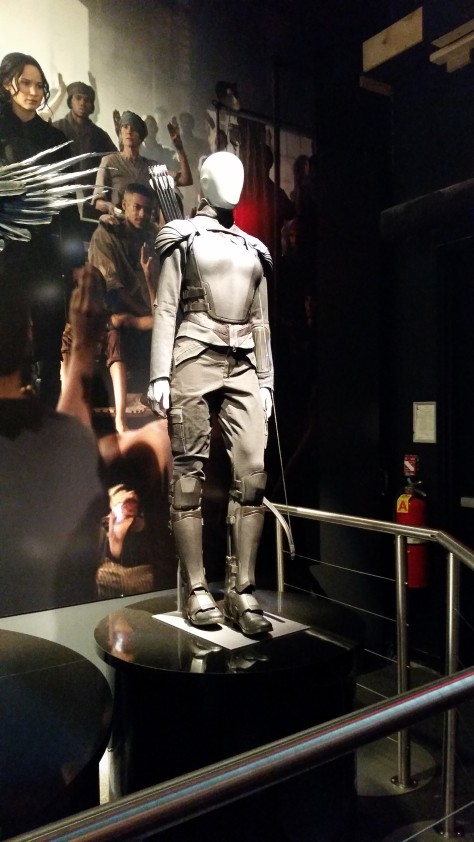 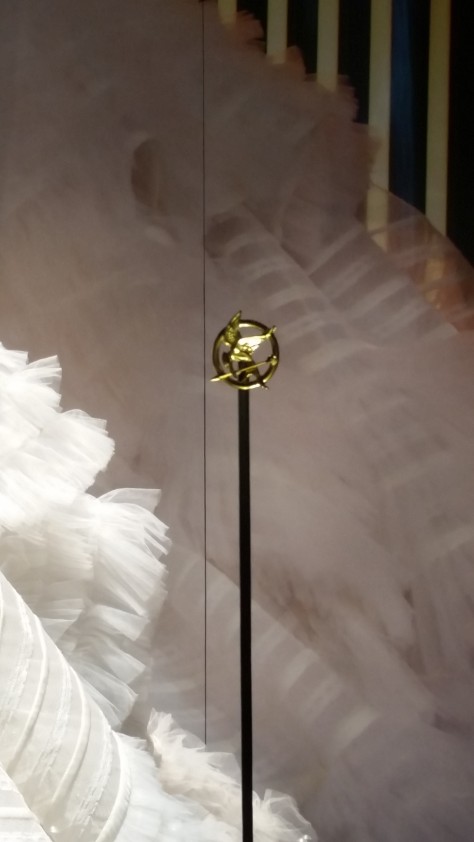 Die hard fans of The Hunger Games might a little more excited to see all of this up close, but I still enjoyed the exhibition quite a bit. My only complaint about it was that tickets aren’t exactly cheap – I think with tax it cost me a little over $30 – but I think that there are also discounts that can be taken advantage of if you know what time you will be visiting the exhibition (the tickets are a timed entry, though you can wander around the exhibition as long as you want). $30 wasn’t bad for me, but I could see how this exhibition may be a little cost prohibitive for a family. But if you or someone in your family are really into The Hunger Games, it is probably worth the trip (though I’m biased, I think anything is worth a trip to NYC). I went on the second day that the exhibition was open and while it wasn’t super crowded, there were still plenty of people milling around; I imagine it will be even more crowded as more people discover that this exhibition exists and on weekends. I was in and out of The Hunger Games exhibition in a little under an hour, but I also moved pretty efficiently through and didn’t wait to try a lot of the interactive portions since you can’t really shove a twelve year old girl out of the way (so I’ve been told). All in all I dug The Hunger Games exhibition and even learned a little something, which wasn’t a bad way to kick off my day in New York.

The Hunger Games: The Exhibition is currently open at Discovery Times Square.