Here’s a good rule of thumb – if Kyle Chandler shows up in a movie, it’s probably good. I’m sure that there are exceptions to this, but in general it holds up. Chandler is rarely the star – he always has a small but significant part – yet he has demonstrated pretty good taste in choosing the movies in which he appears after his role as Coach Eric Taylor on Friday Night Lights. Carol, Zero Dark Thirty, The Wolf of Wall Street, and Argo all have two things in common – Kyle Chandler turns up and all of them received Oscar nominations. The Spectacular Now was an indie darling. His presence is often a pleasant surprise; rarely do I go into a movie expecting to see Chandler, but like the harbinger of good things, I am always relieved to see his face. If it’s good enough for Kyle Chandler, it’s probably good enough for me.

So I was delighted when I discovered that Chandler has a role in Manchester By The Sea. I had gone into the movie knowing very little about the plot and while the film had a lot of positive buzz around it, I wasn’t fully sure what to expect. Enter Kyle Chandler stage right and I knew everything was going to be fine. Manchester By The Sea is a drama that is sad and tragic, but also occasionally has moments of humor and lightness. The story is simple, but the characters are incredibly complex; the actors that inhabit them give beautifully nuanced performances that leave an impression. At times, Manchester By The Sea can be unbearably sad. I cried many times while watching it in the theater and I really hate doing that. But there is beauty in that sadness, a compelling story about loss, grief, and family.

Casey Affleck stars as Lee Chandler, a janitor for an apartment complex in Quincy, Massachusetts. Lee is a loner and seems ready to lash out at the world, especially after he has been drinking. When his brother Joe (Kyle Chandler) dies, Lee is surprised to discover that he has been named the guardian of his teenaged nephew Patrick (Lucas Hedges). Taking care of Patrick requires Lee to move back to Manchester-by-the-Sea, where he is forced to face his own tragic history, personified by his ex-wife Randi (Michelle Williams). Lee tries to help Patrick through his own grief while battling his own demons.

There is no doubt that Manchester By The Sea is a sad movie, but it also finds the humor in grief. There are a lot of humorous exchanges between Lee and Patrick as they explore the unchartered waters of their new reality. Patrick is a good kid, but he’s also a bit of a wiseass and both he and Lee are undoubtedly using comedy to help them deal with the death of Joe. This humor helps balance Manchester By The Sea out; the film can delve into some very dark territory but the viewer never feels like they are completely drowning in sadness because there is inevitable some laughs around the corner. They cut the tension and make Manchester a better movie.

Casey Affleck really delivers a powerhouse performance; as more facets are revealed of Lee’s past, Affleck plays the many different notes of his personality in a natural and understated way. There’s a lot going on with Lee and the film is not afraid to make him completely unlikable one minute and deeply sympathetic the next. Affleck really disappears into the role, inhabiting all the complex and conflicting attributes. Lee really is trying to be there for his nephew in this time of sorrow, but Lee also cannot outrun the past that he is forced to reckon with. There’s a lot going on in this role, but it always feels real and Affleck’s performance is lived in and natural. Casey often toils in the shadow of his more famous older brother, but Manchester is a tour de force performance that solidifies that the talent in the Affleck family runs pretty deep.

Newcomer Lucas Hedges holds his own in the film as well and deserves the critical recognition that he’s received. Hedges and Affleck have excellent on-screen rapport and Hedges feels like a real teenager – overwhelmed by grief, but also a little selfish and self-centered, focused on what everything means to him rather than anyone else. Michelle Williams, who is one of my personal favorites, doesn’t have a ton of screen time but makes the most of what limited time she has with a heartbreaking and devastating performance. There is a scene between her and Affleck toward the end of the movie that just destroyed me and made you feel the pain of both of these characters. They have dealt with their past in very different ways and though they share a history, they cannot seem to figure out a way to help each other without causing more heartache. If Viola Davis wasn’t submitting herself in the supporting actress category this year, I think Williams would have been the frontrunner to win. It’s been nearly a month since I’ve seen this movie, but her scene with Affleck is still the first thing I think about when I hear a reference to this movie. That’s how powerful it was.

I really enjoyed Manchester By The Sea, at least as much as you can enjoy a film with this subject matter. The acting is strong across the board and while the story is emotionally challenging, it is told in a beautiful and artistic way. Casey Affleck is currently the frontrunner for Best Actor at the Oscars and while his personal history may (rightly) jeopardize that, on a purely artistic level this is perhaps the best performance of his career. Manchester By The Sea is chock full of realistic depictions of grief and what happens when running away from your demons is no longer an option. The characters feel real and their journeys are authentic; while they are all impacted by their ordeal, they are not completely transformed. This is a heavy movie that is tempered by its interludes of lightness. It’s a film that has stuck with me, which is one reason that it took me so long to review as I struggled to articulate why it was so captivating. And, for the record, in his limited screen time, Kyle Chandler is, as always, aces.

Manchester By The Sea is currently in theaters.

Since I didn’t know that one could make a living as a pop culture maven back when I was in college, I took a different path of majoring in both political science and economics. I was good at economics but didn’t necessarily enjoy it, so I chose to pursue political science when I went to graduate school, where I spent way too long pursing (but not actually completing) my PhD. Despite my training, I generally don’t like to talk about politics because its one of those topics where everyone considers themselves an expert even if they don’t really know what they are talking about. I especially avoid political threads on Facebook since that is usually an exercise in futility – people have their ideas and are unlikely to change them so it just dissolves into people trying to “get” their political opponents or a back and forth of pointing blame. The only time I’m compelled to swoop in is when I see some egregious factual errors and even then it has to really bother me to get involved. Biting my tongue is sometimes very hard and it’s been a very rough year as people have become more vocal due to the presidential elections and are getting their information from dubious sources. Some days I just want to force everyone to sit through one of my Political Science 101 lectures to just get the basics right.

Thankfully, pop culture offers me some salvation, which is ironic since people definitely have their opinions about movies, music and TV series (and I usually think that they are wrong about them). I guess because the stakes are low and so much is based on personal taste/opinion rather than cold hard facts that kind of discussion doesn’t bother me. In this week’s roundup I’ve cultivated plenty of info for you to talk about. So get yourself caught up on the pop culture stories that you might have missed while I take some Advil and stay off Facebook.

You know her name, but do you know her story? #BritneyEverAfter premieres, February 18th at 8/7c. pic.twitter.com/IADZsZe9x2 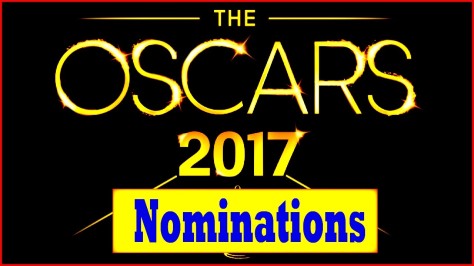 Today is one of my favorite days of the year – it’s Oscar nomination day! I was a little off my game this year because the weather delayed my commute so I missed the live announcement. It was actually a lot less stressful to just see the compiled list at the end rather than waiting for each individual category to be announced and yes, I fully own that it is ridiculous that I am stressed out at all about a process that has absolutely nothing to do with me. But when you love movies, you are invested and it’s nice that my cold, black heart still gets excited about something.

Overall I can’t say that there were a ton of surprises in this year’s nominations as they shook out generally how I thought they would. As much as I loved Deadpool I knew that wasn’t going to be an Oscar contender in anything other than at best some of the technical categories. That’s the downside of the wacky Golden Globes nominations – they get your hopes up about some movies that the Academy is never going to recognize. What was most shocking to me was that Mel Gibson somehow squeaked out a Best Director nomination for Hacksaw Ridge. I haven’t seen the film yet, so I cannot comment on how well it was directed, but I figured that Gibson would be persona non grata a while longer for being a generally despicable person. I guess there is an expiration date on anti-Semitism in Hollywood, at least enough to get the nomination. I don’t think there’s any way that he actually wins.

The other big surprise was that Amy Adams didn’t receive a nomination for her performance in Arrival, which managed to nab a Best Picture nomination but none of the actors were recognized. There was a lot of buzz about Adams leading up to the nominations, so her omission took a lot of people by surprise. I think a lot of people had Ruth Negga on the bubble for her performance in Loving, so her inclusion over Adams may have added to people saying that Adams was snubbed. I like Amy Adams a lot and thought that she was quite good in Arrival, but I think this was just a year where there were a lot of good performances and unfortunately someone had to be left out.

After last year’s #Oscarssowhite controversy, this is certainly a much more diverse group of nominees. I think some of that had to do with changes in the Academy membership this year, but I also think that this was a very good year for performances by people of color to choose from. Even more encouraging – the types of roles was also diverse. Minority actors had roles in all sorts of stories beyond historical dramas and celebrity biopics. I hope this trend continues.

Some other random thoughts:

Any reactions to today’s Oscar nominations? Anything that you rooting for to win? Are you part of the La La Land backlash? What’s the biggest snub? Sound off in the comments section.