This has been an exceedingly chaotic week for me – a friend unexpectedly died, I had a weird stomach bug and the Super Bowl festivities somehow managed to throw off my entire weekend schedule. I think things are finally getting back on track, which is a good thing as I am not a fan of this much disruption at once. I’m a person who likes to stick to a game plan and that’s been out the window lately.

But even with everything going on, there’s still a pop culture roundup. I couldn’t leave you all hanging. As usual, I’ve searched high and low to bring you all the pop culture that you might have missed in the last seven days. This is a one-stop pop culture shop; hopefully you find something of interest in this menagerie that I’ve collected.

Time for some trailers: 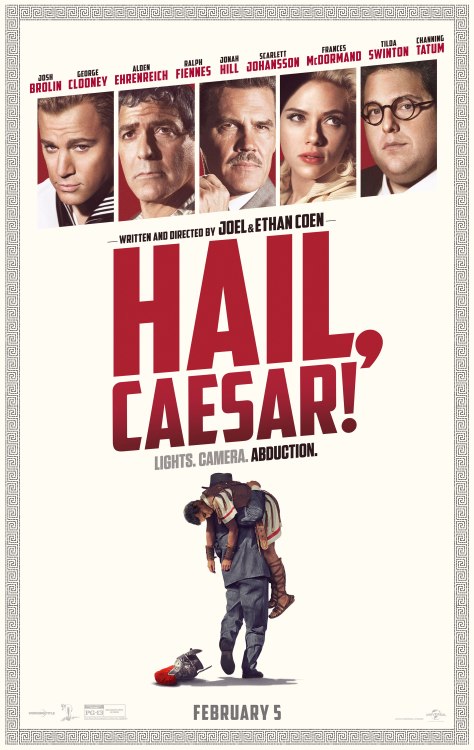 Watching a Coen Brothers movie for me is always something of a gamble; for every Fargo, True Grit, O Brother, Where Art Thou? and No Country for Old Men, there is foolishness like Intolerable Cruelty and A Serious Man. I don’t get the cult that is The Big Lebowski at all and there is always the chance after seeing one of their movies that I’m not 100% sure that I got what they were trying to do. Still, the heights they can reach are worth the occasional lows, so I continue to see Coen Brothers movies with an open mind. Even when I don’t dig what they are laying down, it is usually an interesting mess that they create. I respect their perspective even when it doesn’t line up with my personal preferences.

I wasn’t quite sure what exactly to expect out of Hail, Caesar!. It of course boasts an all-star cast and the Coens have a certain affinity for skewering Hollywood. But the trailer was kind of terrible and the fact that the movie was being released in January – typically when studios dump films that they don’t have a lot of faith in – did not inspire a ton of confidence. Reviews were middling – good, but not great – so that was no help. It was quite possible that Hail, Caesar! was a Coen Brothers film where there was no consensus; some people would love it, others would hate it and still others wouldn’t be quite sure what to make of it.

Overall, I have to say that I was generally entertained by Hail, Caesar!. I had expected more of a zany, screwball comedy from the trailer, but while the film is definitely amusing there are long periods where there aren’t many laughs. The performances are great and if you have any working knowledge of old Hollywood you might get more mileage out of the film than most. The film flirts with some big ideas, but ultimately doesn’t do much with them; Hail, Caesar! just tells the story that it wants to tell; it doesn’t necessary amount to a lot, but it is an entertaining journey nonetheless.

Hail, Caesar! is basically a day in the life of Eddie Mannix (Josh Brolin), a “fixer” for Capitol Studio. It’s his job to make sure that the films get done on time and that their stars don’t get unwanted scrutiny from the gossip columns. Mannix is basically a good guy – family man, trying to quit smoking, goes to confession a lot – but wrangling the various cast of characters employed at Capitol is a full-time job. There’s DeeAnna Moran (Scarlett Johansson), an Esther Williams-type actress who has been divorced twice and is now pregnant with a baby of unknown fatherhood that must be covered up. Then there’s Hobie Doyle (Alden Ehrenreich), an actor known for playing cowboys that is now thrust into the starring role of a prestige drama and is in way over his head. Mannix is also being courted for an attractive job offer from Lockheed Martin by a persistent headhunter and dodging the prying of twin gossip columnists Thora and Thessaly Thacker (both played by Tilda Swinton). So Mannix already has a lot on his plate when Baird Whitlock (George Clooney), the charming yet kind of dumb star of the movie within a movie Hail, Caesar!, is drugged and kidnapped. Hail, Caesar! chronicles Mannix trying to put out all of these fires as well as offer some pretty great vignettes of the various movies that are filming on the Capitol lot. The musical starring Burt Gurney (Channing Tatum) is in particular a joy to watch. Honestly, seeing Tatum sing and tap dance might have been worth the price of admission alone. He’s fantastic.

The performances in Hail, Caesar! are all really wonderful and it is nice to see so many returning actors from the Coen universe in the film. Brolin is who carries this film and he does a tremendous job as Mannix; he’s competent because he believes in what he is doing, even if it does take its toll on him. Brolin is responsible for keeping all these various storylines spinning and he does so in an efficient manner. Clooney also embraces his role as Baird and has some fun with it; given his many return appearances in Coen Brothers movies, one has to assume that Clooney really enjoys getting to flex this particular acting muscle. He gets to be dashing, yet goofy and Baird’s affable reaction to being kidnapped is very funny to watch. I will never fail to be amused by Johansson trotting out her tough girl Brooklyn accent and the scenes of her aquatic film with is film are beautifully choreographed and shot. She doesn’t have a huge role, but she makes the most of her screen time to create a fun and memorable character.

Perhaps the most surprising standout is relative newcomer Alden Ehrenreich. He more than holds his own with his more famous co-stars and is very sweet and funny as the cowboy who is now forced to wear tuxedos. Ehrenreich really makes his mark in Hail, Caesar! and I hope this leads to more roles for him. It’s not easy to steal the spotlight from actors like Clooney and Brolin, but he manages to occasionally do just that. His enunciation lesson with director Laurence Lorenz (Ralph Fiennes) as they try to transform his drawl into a Mid-Atlantic accent is comedy gold.

Some other quick thoughts:

Hail, Caesar! is a farce that goes down some interesting side streets and takes on some heavy issues like religion and communism without ever really resolving anything. The story ends when it ends and not everything that transpires in the film is resolved; this is not a neat and linear narrative, but really a series of events that are strung together and abandoned as the Coens deem appropriate. It’s really more amusing than laugh out loud funny and I’ll admit that when the credit rolled, I wasn’t 100% sure how I felt about what I had just witnessed. I’d put it in the middle of the pack of the Coen Brother filmography. Hail, Caesar! is a fun film that has lots of in jokes for those that are in the know about their Hollywood history, but it is just as enjoyable for those who know little of the goings on of the old studio system. It’s not a spectacular film and it isn’t a bomb – Hail, Caesar! is a nice film going diversion that has some great performances and silly moments. Not must-see, but a welcome addition to the Coen Brothers catalog.

I took another whirlwind trip to NYC yesterday – details to come next week – which was tremendous but also resulted in me getting only a little more than four hours of sleep (sadly, I do not have a three day holiday weekend; I’m in the office today). So I’m pretty much running on fumes and probably not all that fun to be around. However, I didn’t want to send you into Independence Day weekend without a little something to put a smile on your face, so I humbly present to you Channing Tatum voguing:

Madonna would be proud.